There is much to celebrate about the past 30 years of APS, an organization founded to advance the science of psychology. And that includes a key part of the APS membership — students. From its inception in 1988, APS has boasted a large student base. Of its 30,000 members, more than 13,000 are students. Like APS itself, the APS Student Caucus (APSSC) came from humble beginnings but has grown to serve the needs of students through funding, programming, and career-development opportunities.

When APS was founded in 1988, membership grew quickly; after 6 months, more than one third of members were students. In 1989, a group of students at the Second Annual APS Convention established what we now know as the APSSC, with an understanding that serving students would be key to the success of APS. In those days, Alan Kraut, founding Executive Director of APS, began a tradition of hosting APSSC Executive Board members together with APS Board members to discuss the strategies and goals of both groups over dinner.

Although things have changed since the early 1990s, the APSSC Executive Board still meets each year in Washington, D.C., to discuss strategies for better serving APS student members. Over the past 30 years, many things have changed as APSSC has grown to meet the evolving needs of its students. Below are just a few of the things that APSSC offers.

Over the past several years, APS has increased its commitment to promoting diversity within its membership. From early on, APSSC supported this mission through the Researching Injustice and Social Equality (RISE) Research Award, which was given to four student members who conducted research in fields related to socially and economically underrepresented populations. In 2016, APSSC moved to expand the reach of the RISE Research Award. Now, in addition to recognizing research related to underrepresented populations, the 2018 RISE Research Award will also recognize students from diverse racial, ethnic, geographic, and cultural backgrounds, as well as from other underrepresented groups in psychological science. In addition to having their work recognized at the Annual Convention, RISE Research Award winners also receive a monetary award.

Consistent with the overall mission of APS, APSSC strongly supports the promotion of diversity within psychological science and is committed to increasing representation of students from all backgrounds and walks of life.

APSSC also has several other funding opportunities available to students:

From the kickoff Student Social event to the “Naked Truth” panels that provide advice to students at all career stages, APSSC is committed to engaging student members at the Annual Convention. APSSC organizes several talks that focus on getting into graduate school, surviving graduate school, and navigating the job market after graduate school. Last year, as a result of high demand by APS student members, a fourth panel was added to discuss nontraditional jobs in psychological science. This event brought together APS members from different industries to discuss how to pursue careers outside of academia or clinical practice.

In addition to these discussions, APSSC also gives students the opportunity to interact with key players in the field of psychological science. For students interested in publishing their research, the Editors’ Panel brings together individuals from the editorial boards of leading journals in psychological science to discuss strategies for writing successful articles for peer review. Additionally, the annual “Champions of Psychological Science” meeting gives students the opportunity to have informal conversations with leaders in the field who share their thoughts on topics that are important to students, such as career development and work–life balance.

Pulling It All Together

An APSSC Executive Board member is responsible for every flyer distributed, social event organized, and panel created. The APSSC Executive Board is composed of nine members elected by the larger APS student membership. APSSC Executive Board members serve 1-year terms, during which time they work tirelessly to provide the best possible benefits to students. As the 2017–2018 president, I have been humbled by the hard work and dedication that all of the APSSC board members have put forth this year. However, because there are so many student members and so few board members, it is often difficult for students to learn about all of the benefits they receive from being a part of APSSC.

Have you ever wanted to learn more about what goes into the peer-review process to improve your own scientific writing? Student members can play a key role by serving as reviewers for all APSSC award and grant competitions. Interested in becoming a leader at your school and promoting APSSC to other students? You can become a Campus Representative for your university. Would you like the opportunity to mentor an undergraduate who is thinking about graduate school or be mentored by a graduate student if you are an undergrad yourself? Student members can become a part of our mentorship program. (For a full list of APS student member benefits, click here.)

Although there are many ways to get involved with APSSC as a student member, there are likely even more things that APSSC could do to serve students. If you are a student member who is passionate about a certain topic, or if you look at the programming that APSSC provides now and would like to make it even better, I encourage you to run for a position on the APSSC Executive Board in January. Challenge the status quo. Make things better. That is what the group of individuals who founded APS aimed to do, and that is still what we strive for 30 years later. Until then, if you have a question, concern, or suggestion for how APSSC can make things better right now, email me at apssc.president@psychologicalscience.org.

Amy Heard Egbert is the 2017–2018 President of the APS Student Caucus. A fourth-year doctoral student in the clinical psychology program at Loyola University Chicago, Egbert focuses her research on the environmental and biological correlates of obesity and eating disorders.

Three APSSC members have been selected to receive the Outstanding SSCP Student Researcher Award. Each recipient will receive a free 1-year extension of their APS Membership. Colleen Stiles-Shields is a doctoral candidate at Northwestern University. 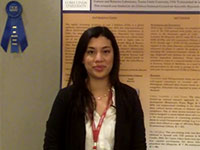 The aim of the study was to examine the influence of cultural beliefs and psychological factors on treatment compliance among native Mapuche and mainstream Chilean diabetics. Structural equation modeling revealed that for both ethnic groups

The Many Benefits of an APS Student Membership

January 2014 Student Notebook Announcements The Student Notebook is seeking advanced graduate students to contribute articles on the following topics: (1) developing a programmatic line of research and (2) establishing a research lab. To find