Everyone knows by now that the U.S. is in the midst of an obesity epidemic, but for all the hand-wringing, nobody really knows why. Experts have offered many theories about why Americans eat too much—and especially too much fattening food—but these remain theories. It’s because Americans are ill-informed about diet and nutrition. We simply do not understand that double cheeseburgers are loaded with fat and calories. Or it’s because we’re constantly bombarded with stimulating ads for tempting but unhealthy snacks. Or we simply lack the self-discipline of earlier generations. Or all of the above.

Or perhaps something else entirely. Two University of Miami marketing experts, Juliano Laran and Anthony Salerno, are now offering a new and provocative idea about why Americans make poor food choices, along with some preliminary evidence to back it up. They contend that the news we’re exposed to every day—specifically information about the economic crisis, adversity and struggle in a harsh world—is triggering a live-for-today mindset that makes us shortsighted about diet. For reasons rooted deep in our evolutionary past, living in a harsh world focuses us on immediate reproductive success, which makes us fiercely competitive for scarce resources. This sense of immediacy makes us dismiss the future and focus on the here and now, including a filling diet, rich in calories. Once adaptive, this life strategy leads, in modern-day America, to too many French fries and chocolate mocha ice cream.

At least that’s the theory, which the psychological scientists tested in a few experiments. In the first one, they invited passers-by to join in a taste test for a new kind of M&M. Half the volunteers were given a bowl full of this new candy, and were told that the secret ingredient in the new M&Ms was a new high-calorie chocolate. The others—the controls—also got a bowl of M&Ms, but they were told that the new chocolate was low-calorie. All the volunteers were told they could sample the product until the next part of the study.

This was a ruse. The scientists were actually measuring their consumption. But during this waiting period, some read a text that emphasized harshness and deprivation, with words like survival, persistence, shortfall, and adversity. The controls read a text with neutral words. The idea was that those who were subconsciously primed to think about scarcity and struggle would eat more if they were offered high-calorie food—more than if they were offered a low-calorie option. And they did. And as reported in a forthcoming issue of the journal Psychological Science, they also ate more of the high-calorie candy than did controls, and less of the low-calorie candy. In other words, they were responding to their (perceived) world of deprivation by packing away the calories.

M&Ms will certainly make you obese, if you eat enough of them. But isn’t it possible that chocolate eaters are simply seeking pleasure, indulging themselves rather than coping with a scarcity of food? The scientists wanted to make sure that the high-calorie eating was related to perceived deprivation, rather than mere indulgence, a possibility they addressed in a second study. They again primed some volunteers to think a harsh world of scarce resources, while others were primed to think about comfort, enjoyment, pleasure and indulgence. Then half of the volunteers in each group was given a small amount of money, which was intended to satisfy their psychological need for resources—and thus diminish their calorie seeking.

They tested this by offering all the volunteers a choice between a garden salad and cupcakes. As predicted, those primed for a harsh world were less likely to choose cake if they were given monetary resources than if they were not, suggesting that they didn’t need the calories to cope with deprivation. Those primed for pleasure seeking were—like the controls—just as likely to take the cake if they had been paid or not. In short, the deep psychic need for scarce resources is altogether different than mere indulgence in taste. Even a tiny amount of money appears to decrease calorie seeking.

So is there a way to put these findings to good use—to deliberately decrease calorie seeking? Perhaps so. In a final experiment, Laran and Salerno tried to reverse the short-sightedness that leads to high-calorie eating. They again primed only some volunteers to think about scarcity. Then they used a second kind of priming to make some of these scarcity-minded volunteers, and some controls, focus on the slow passage of time; others were primed to think about the rapid passage of time. The idea was that taking the long view of time would undo the sense of urgency leading to unhealthy eating. 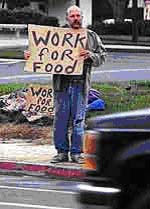 And that’s what they found. When offered a choice of salad or and cheese and turkey sandwich, the scarcity-minded volunteers opted for the high-calorie sandwich only when mindful of fleeting time. If they were primed to think of time as slow and plentiful, they were much less likely to opt for the immediate calories—and more apt to eat salad. Looked at another way, reorienting people’s distorted sense of time and urgency—this strategy appears to help them make healthy food choices.

The world can seem like a competitive and unforgiving place these days, with so many people out of work and the economy struggling. All Americans have to do is turn on the TV to get daily reminders of the world’s cruelty and suffering. While it’s not clear just how these findings might translate into strategies to undo this daily priming, it may not be enough to simply inform people about the calories and nutrition in this or that food—and expect them to make disciplined food choices.

Wray Herbert’s book, On Second Thought, devotes a chapter to irrational thinking about calories and other resources. Excerpts from his two blogs—“We’re Only Human” and “Full Frontal Psychology”—appear regularly in The Huffington Post and in Scientific American Mind.

I appreciate David Kessler’s explanation from “The End of Overeating.” For years, humans have maintained a relatively stable weight through feast or famine. Hunger drove us to eat when our bodies needed nutrition, and satiety signaled us to stop when those needs were met. Then our foods changed. High fat, sugar, and salt content created “hyper-palatable” foods that triggered the reward centers in our brains. Now, hunger is no longer the dominant system driving our eating habits. Our eating habits are now driven by a reward system. How often do we find ourselves ordering dessert while our bellies are still swollen from dinner? It is not hunger that drives this behavior. Our brain craves the stimulation of these highly palatable foods.

This theory doesn’t explain why there has been an obesity epidemic in America since long before the economic crisis.

Quite amusing, as I recently read an article about Norwegians being the healthiest in Europe (sources in Norwegian: http://www.forskning.no/artikler/2012/mai/322097).
We are at the other end of the spectrum, we don’t really worry too much as the economy is great and our country is safe from most regular harm.
As we don’t worry, we think more long-term diets and thus become more healthy.
The Greeks, however, with their failing economy and all, are having big problems with their weight and physical health.