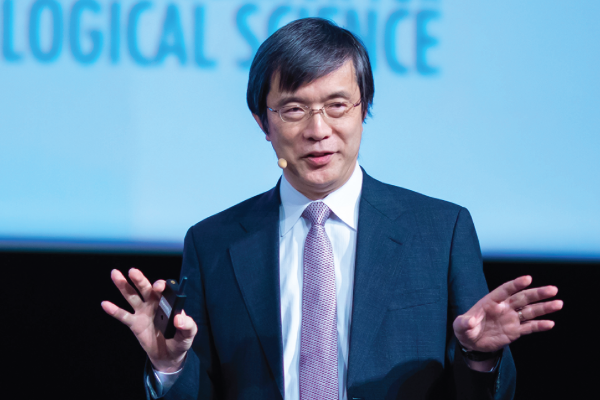 The human brain isn’t the biggest of all animal brains, but evidence suggests that it’s worthy of another superlative: most sophisticated. Our capacity for abstract thought, imagination, self-awareness, perspective taking, and other mental feats makes the human brain unique — but how did we get here? In his Fred A. Kavli Keynote Address at the International Convention of Psychological Science, neuroscientist Atsushi Iriki discussed research-based insights into the evolutionary phases of brain development and hypotheses about what may be coming next.

According to Iriki, Head of the Laboratory for Symbolic Cognitive Development at RIKEN Center for Biosystems Dynamics Research in Japan, the first transition between evolutionary phases occurred with the emergence of the primate brain about 70 million years ago.

In the mammalian order, primates are phylogenetically closest to rodents, but the brains of the two types of mammals are strikingly different. Big rodents, such as the capybara, have brains that are larger but otherwise structurally analogous to those of smaller rodents. Big primates, on the other hand, have brains that are structurally different from those of smaller primates, with a larger primary cortex and a much larger association cortex. Primate brains are also unusually neuronally dense: Capybaras and a rhesus macaques have brains that are relatively similar in size, but the macaque brain contains almost six times as many neurons.

The emergence of the primate brain, a rapidly self-evolving machine, marked the first phase transition, said Iriki, but the second phase transition occurred more recently, about 1 to 2 million years ago.

Judging by the archaeological record, brains increased in size at a steady rate from primates to prehominids. Then hominins appeared. Between Homo habilis and Homo neanderthalensis, our closest human relative, brain size skyrocketed. What caused this explosive growth?

There are many theories as to the cause, but a compelling one is the coevolution of tool use and language, Iriki said. To study this in the lab, Iriki focused on tool use, which shares core brain structures with language and is easier to teach. Although Japanese macaques aren’t natural tool users, Iriki and his team found that they could train the monkeys to use a small rake to grab tasty treats. The macaques then learned how to use the rake to reach food they could not directly see, taking information from a live video feed to direct the rake to the appropriate spot.

Recordings from parietal cortex neurons representing both somatosensory and visual information around the monkeys’ hands revealed that the tool had been incorporated into their visual and tactile receptive fields, becoming an extension of their body schema.

Additional studies revealed that after the tool-use training, monkeys began combining tools to reach even farther, a skill they were never taught.

And the researchers discovered that these behavioral changes were accompanied by changes in gene expression in the parietal cortex and increased intracortical connection between the temporoparietal junction and parietal cortex.

Monkeys in the wild show a spectrum of cognitive development that stops short of humans’; monkeys don’t regularly use tools because they don’t need to, Iriki said. But the results of the training studies showed that artificial training could enable an expansion of this spectrum, creating more of an overlap between human intelligence and monkey intelligence.

“I’m not saying that we can make a monkey a human,” he added. “Because of their capacity, we cannot introduce all of the elements of human intelligence.”

But training does facilitate some of those elements, including some high-level metacognitive skills.

After years of trial and error, Iriki and his team were able to expand the monkeys’ tool-use repertoire to include tools that augmented their sensory ability. The researchers took a hand rake, similar to those used in the earlier studies, and attached a big mirror at the end, adding a sensory cue to a tool that was already integrated with the monkeys’ body image. The monkeys were then able to explore the surrounding environment with the mirror and reach for the food with the rake.

Several training steps later and the monkeys were able to use a small camera, similar to an endoscope, attached to the end of the rake.

“This is as if you’re grabbing your eyeball and sticking it at the tip of the tools to explore where you cannot see,” says Iriki.

This tool may seem functionally similar to the mirror-rake tool, but the camera’s video feed gave the monkeys an unprecedented ability: They could now see themselves from a third-person perspective.

Acquiring a perspective on one’s own self is rare for monkeys, and it is a relatively late-developing skill among human children. But this skill is what allows us to think about ourselves as existing continuously through time, and with this concept of a continuous core self comes the ability to think about and plan for the future.

To understand how the metacognitive ability to think about one’s self distinguishes humans from other animals, Iriki asked the audience to think about beavers and humans.

Beavers adapted to an aquatic environment by modifying it, building dams to make it habitable; in doing so, they created a novel niche. Humans, with our buildings, cars, and roads, are also engaged in niche construction. However, humans, unlike beavers, aren’t satisfied with a job well done; we are always seeking continuous improvement, striving for whatever is bigger, better, or more comfortable.

Importantly, this plasticity isn’t limited to an individual lifetime, but is carried on through extragenomic means. As the earlier monkey-training studies showed, adaptation to changes in the environment, including learning how to use new tools, can induce changes in gene expression. Thus, the cultural inheritance of knowledge through social learning may have accelerated the expansion of the brain to its current human form, Iriki said.

And we now may be constructing a new niche through the limitless expansion of our symbolic space, he added, as the development of technology allows us to externalize our brains in ways that were previously impossible.

Whether we are aiming for increased quality, sophistication, happiness, or comfort, “there are many ways we can seek growth without hitting the physical limit of the resources,” he said.

What will happen next? Iriki offered the audience a speculative hypothesis: a third phase transition spurred by our integration with artificial intelligence.