It seems logical that a student who is interested in science as an academic subject would also know a lot about science, but new findings show that this link depends on the overall wealth of the country that the teen calls home. The research suggests that individual science achievement may be influenced as much by broad national-level resources as it is by personal interest and motivation. 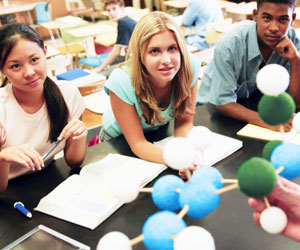 “Our results suggest that children with high levels of interest in science are able to turn their scientific interest into actual science knowledge to a greater extent when raised in more fortunate socioeconomic circumstances,” says psychological scientist Elliot Tucker-Drob of the University of Texas at Austin, lead researcher on the study. “The take home message of this research is that the joint effect of socioeconomic resources and academic interest is more than the sum of its parts.”

Tucker-Drob and co-authors Amanda Cheung and Daniel Briley wanted to understand the factors that lead to achievement in scientific disciplines, seeking to examine the joint impact of two factors — academic interest and socioeconomic status — that are often looked at independent of each other.

The researchers hypothesized that students living in wealthy nations would have more opportunity to “select, evoke, and attend to science-relevant learning experiences” that facilitate their interest in science. Students who live in poorer nations, however, would have far fewer avenues by which to develop their scientific interest and learning.

Tucker-Drob and colleagues examined data taken from the Programme for International Assessment (PISA), an ongoing international data collection project run by the Organisation for Economic Cooperation and Development (OECD). For PISA, a new international sample of 15-year-olds is assessed every 3 years on reading, mathematics, and science skills.

Looking at the data collected in 2006, the researchers found that resources mattered, at all levels, for predicting science achievement.

The researchers found that science interest and science knowledge were not related at all for students from poor countries.

“In the context of poor family, school, and national socioeconomic conditions, student interest in science is unrelated to science achievement,” says Tucker-Drob. “This indicates that there may be a tremendous amount of untapped talent in the population, which is particularly concerning given national emphases on increasing the number of students of science and technology.”

While further research will be needed to establish causal links between science interest, national GDP, and science achievement, the findings are important because they highlight the considerable variation in psychological effects that can be seen across different populations.

“[T]he current results add to the growing body of evidence indicating that substantial heterogeneity in psychological effect sizes is not simply a logical possibility but in many cases an empirical reality,” the researchers conclude.

The Population Research Center is supported by National Institutes of Health (NIH) Grant R24HD042849. D. A. Briley was supported by NIH Grant T32HD007081.