People searching for something can find it faster if they know what to look for. But new research suggests knowing what not to look for can be just as helpful.

Although previous studies concluded that attempting to ignore irrelevant information slows people down, Johns Hopkins University researchers found that when people are given time to learn what’s possible to ignore, they’re able to search faster and more efficiently.

“Individuals who explicitly ignore distracting information improve their visual search performance, a critical skill for professional searchers, like radiologists and airport baggage screeners,” said lead author Corbin A. Cunningham, a graduate student in the Krieger School of Arts and Sciences’ Attention and Perception Lab. “This work has the potential to help occupations that rely on visual search by informing future training programs.” 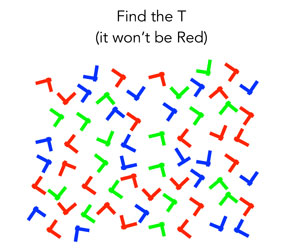 In two experiments, researchers asked participants to search for certain letters on a computer screen. They had to find either a capital “B” or an “F,” among other letters of assorted colors. Sometimes, the participants were told the “B” or “F” would not be a certain color, like red. Other times they were given no color hints.

When participants were given one color to consistently ignore throughout the experiment, their reaction time slowed at first, but after extended practice, about a hundred trials, they were finding the target letters significantly faster than participants who weren’t given a color to eliminate.

In fact, the more information participants were able to ignore, the faster they found the target.

Although trying to disregard distractions might initially slow people down, the researchers concluded that over time, people are more efficient when they know what’s not worth paying attention to.

“Attention is usually thought of as something that enhances the processing of important objects in the world,” said co-author Howard Egeth, a professor of Psychological and Brain Sciences at Johns Hopkins. “This study, along with some recent work in which we measured brain activity while subjects responded selectively to stimuli presented in the midst of competing stimuli, highlights the importance of active suppression of those competing stimuli.  It’s what I think of as the dark side of attention.”

You can learn more about the research in this video from Johns Hopkins University:

I want more of these

I love these kinds of test , I dicdn’t find it hard at all to find the T’s . Wish you could send me more at my email address ! Soledad

Of course ,b cuz u automatically look at everything u r trying 2 ignore it’s human nature! No info no time lost!!!