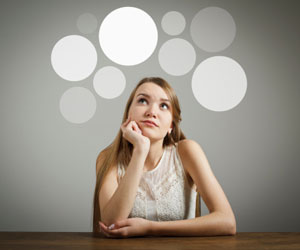 Positive fantasies about how future events will turn out can boost your mood in the here and now, but they may actually lead to increased depressive symptoms in the long run, according to new research published in Psychological Science, a journal of the Association for Psychological Science.

“Our findings suggest that as pleasurable and helpful as positive fantasies are for depressive mood in the moment, they can be problematic and cumbersome over time,” says lead researcher Gabriele Oettingen of New York University.

This pattern of results emerged when the researchers tested both adults and children and over follow-up periods that ranged from 1 month up to 7 months after the initial session.

In one study, the researchers asked 88 undergraduate students to imagine themselves in 12 different open-ended scenarios. The students were given a prompt for the scenario and were told to imagine how the scenarios would play out. The participants wrote down whatever thoughts and images came to mind and rated how positive and how negative these fantasies were.

Oettingen and colleagues found that the college students who came up with more positive fantasies had lower scores on a scale measuring depressive symptoms – that is, at that moment, they seemed to be less depressed than their peers. However, when the students completed the scale again one month later, they showed higher depressive symptoms relative to students who had imagined more negative scenarios.

Additional findings indicate that individual effort may help to explain, at least in part, the link between positive fantasies and depressive symptoms. College students who reported positive fantasies tended to report putting less effort into their coursework; this was, in turn, associated with lower grades and higher depression scores.

Given the correlational nature of these studies, further experimental research would be needed to determine whether there is a direct causal link between positive fantasies and depressive symptoms in the long term. But, according to the researchers, the findings suggest that positive fantasies are a risk factor for depressed mood over time.

“The modern era is marked by a push for ever-positive thinking, and the self-help market fueled by a reliance on such positive thinking is a 9.6 billion industry that continues to grow,” Oettingen and colleagues note in their paper. “Our findings raise questions of how costly this market may be for people’s long-term well-being and for society as a whole.”

Investing in positive fantasies, the researchers argue, may prevent us from acknowledging the obstacles that stand in the way of reaching our goals and undertaking strategies to surmount them.

“Positive fantasies must be complemented with a good sense of reality,” says Oettingen.