Consuming an alcoholic beverage may make men more responsive to the smiles of others in their social group, according to new research in Clinical Psychological Science, a journal of the Association for Psychological Science. The findings suggest that, for men, alcohol increases sensitivity to rewarding social behaviors like smiling, and may shed light on risk factors that contribute to problem drinking among men.

“This experimental alcohol study, which included a social context, finds the clearest evidence yet of greater alcohol reinforcement for men than women,” says psychological scientist and lead researcher Catharine Fairbairn of the University of Pittsburgh. 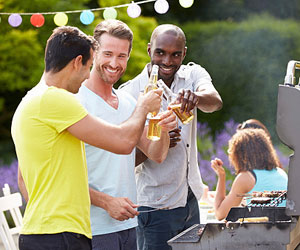 Previous research has shown that men are about 50% more likely to drink excessively than women, and much problem drinking among men occurs in social settings.

“Many men report that the majority of their social support and social bonding time occurs within the context of alcohol consumption,” says Fairbairn. “We wanted to explore the possibility that social alcohol consumption was more rewarding to men than to women — the idea that alcohol might actually ‘lubricate’ social interaction to a greater extent among men.”

Fairbairn, Professor Michael Sayette, and their colleagues decided to focus on an objective non-verbal indicator of social bonding, examining the infectiousness of genuine smiles in drinking groups. Genuine, or Duchenne, smiles are associated with actual felt emotion as opposed to outward displays of emotion, which may or may not be genuine. Importantly, these smiles can be identified and measured using a standardized procedure.

The researchers randomly assigned 720 healthy social drinkers, ages 21 to 28, to groups of three. Each group was then randomly assigned to receive a particular drink: an alcoholic beverage (vodka cranberry), a non-alcoholic beverage, or a non-alcoholic “placebo” beverage that was described as alcoholic. The researchers smeared the glass of the fake alcoholic drink with vodka and floated a few drops of vodka on top of the drink to make it more believable.

The participants in each group were casually introduced and positioned around a table. The beverages were doled out in equal parts over time, and participants were told to drink them at an even rate. Otherwise, the participants weren’t given any specific instruction and were allowed to interact freely.

Based on the video recordings, Fairbairn and colleagues used sophisticated analyses to model smiling behavior in the groups, following the spread of smiles from one individual in a group to the next.

They found that alcohol significantly increased the contagiousness of smiles, but only for all-male groups – it did not have a significant effect on emotional contagion for groups that contained any women. The findings suggest that alcohol is especially likely to induce a sort of “social bravery” among men, disrupting processes that would normally prevent them from responding to another person’s smile.

Among groups who received alcoholic beverages, a smile was also more likely to be “caught” if those on the receiving end of the smile were heavier drinkers, regardless of gender.

Smiles that were likely to catch on were associated with increased positive mood and social bonding, as well as decreased negative mood. Thus, smile infection could represent an important indicator of alcohol-related reinforcement and a mechanism supporting drinking.

These findings are significant, says Fairbairn, because they highlight the importance of social context in understanding drinking behavior:

“Historically, neither the scientific community nor the general public has been terribly concerned about drinking that occurs in social settings. According to popular opinion, a ‘social drinker’ is necessarily a non-problem drinker, despite the fact that the majority of alcohol consumption for both light drinkers and problem drinkers occurs in a social context,” Fairbairn explains.

“Not only that, the need to ‘belong’ and create social bonds with others is a fundamental human motive,” she adds. “Therefore, social motives may be highly relevant to the understanding of how alcohol problems develop.”

In addition to Fairbairn and Sayette, co-authors on the study include Odd Aalen and Arnoldo Frigessi of the University of Oslo.