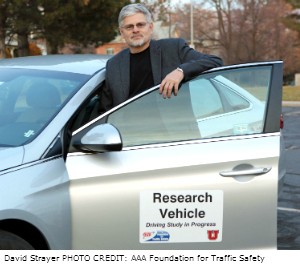 Using a hands-free to device to update Facebook or make a call while driving may not seem so dangerous. After all, your eyes are on the road and your hands are on the wheel.

But a pair of new studies conducted by APS Fellow David Strayer for the AAA Foundation for Traffic Safety found that these voice-recognition systems do little to eliminate distracted driving.

The research shows that drivers can remain unwittingly distracted for up to 27 seconds after they disconnect from a call—even when they’re using the car’s own voice-command system. This means a driver driver traveling at a paltry 25 mph will cover the length of three football fields before their attention is fully restored.

“Most people think, ‘I hang up and I’m good to go,’” says Strayer, a psychology professor at the University of Utah. “But that’s just not the case. We see it takes a surprisingly long time to come back to full attention. Even sending a short text message can cause almost another 30 seconds of impaired attention.”

According to the US Department of Transportation, over 3,000 people died—and 424,000 others were injured—in car crashes involving distracted driving in 2013.

These new studies were designed to provide a valid benchmark for the cognitive workload associated with using in-vehicle voice command systems and smartphone personal assistant apps, like Apple’s Siri.

A very difficult working memory task was used to identify drivers’ distraction using a rating scale that ranged from 1 (not distracted) to 5 (highly distracted). AAA considers a mental distraction rating of two or higher to be potentially dangerous while driving.

Strayer and colleagues recruited a diverse group of 322 drivers between the ages of 21 and 70 to participant in a week-long experiment. Drivers were given five days of practice using the voice command systems in one of 10 different car models before being assessed on the seven behavioral tasks.

As they were driving on residential streets in Salt Lake City, participants were instructed to press a switch every time a red light flashed at the edge of their vision. One study looked at 257 people using in-vehicle voice control systems, while a second study had 65 participants use a smartphone personal assistant app (Apple’s Siri, Google’s Google Now for Android phones, and Microsoft’s Cortana) while driving.

The researchers measured drivers’ reaction times and accuracy for spotting the flashing light as they simultaneously attempted each of the tasks. Video recordings were used to determine where drivers were looking and how they were using their mirrors. Drivers also completed a series of surveys on their perceived level of distraction.

The results were revealing: Even though drivers’ eyes stayed focused on the road during these tasks, their behavior showed signs of distraction.

In-vehicle voice control systems were found to tax drivers’ attentional resources, leading to an average distraction rating of 3.34 on the 5-point scale. All three of the smartphone personal assistants were highly distracting, as were composing texts and emails. Activities such as listening to the radio or an audio book, on the other hand, were not very distracting, producing an average distraction rating of 1.2 out of 5.

“Just because these systems are in the car doesn’t mean it’s a good idea to use them while you are driving,” concludes Strayer. “They are very distracting, very error prone and very frustrating to use. Far too many people are dying because of distraction on the roadway, and putting another source of distraction at the fingertips of drivers is not a good idea. It’s better not to use them when you are driving.”