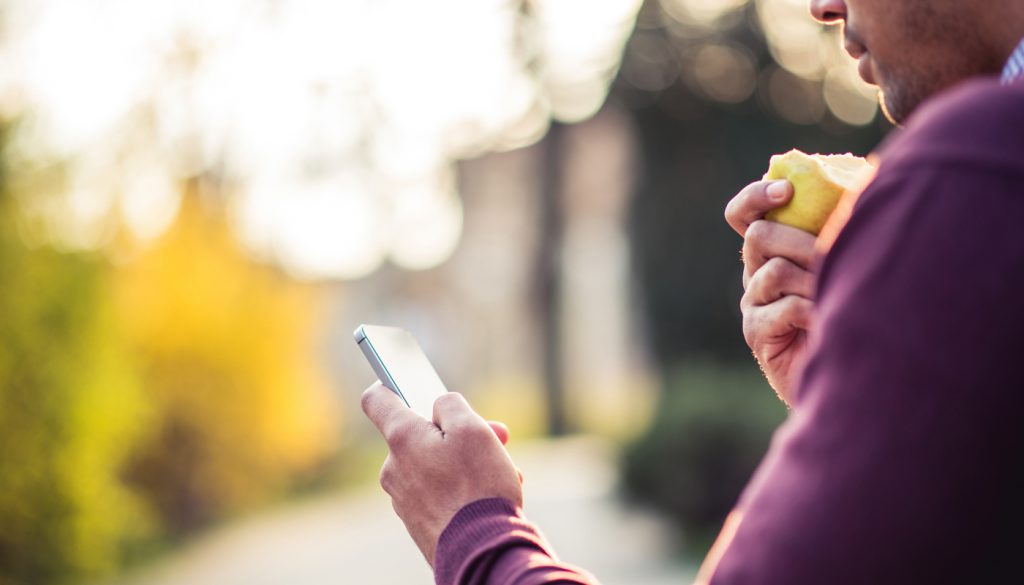 After a flurry of memos, meetings, and phone calls you might be ready for a break. While turning to your phone for a few rounds of Candy Crush or a quick look at Facebook might seem relaxing, new research suggests that when people spent their breaks using a smartphone, breaks just aren’t that restorative.

Psychological scientists Hongjai Rhee (Ajou University) and Sudong Kim (Korea Institute for Research in the Behavioral Sciences) surveyed over 400 working adults about how they spent their lunch breaks. The results suggest that people who turned to their smartphones ended up feeling worse than those who avoided electronic entertainment.

“Recently, the tendency to use smart phones to relax is growing in popularity, but little research exists to provide empirical evidence on the positive influence of using a smart phone during a break on reenergizing,” the researchers explain.

While research investigating work breaks shows that the mental timeouts are essential for keeping employees focused and productive, Rhee and Kim also suspected that, unlike taking a walk or chatting with friends, scrolling through apps on a smartphone might actually sap cognitive resources rather than restoring them.

“For example, unlike a paper book or newspaper, online news or blog content consists of not only the main text but also numerous hyperlinks including related footnotes to the main article or unrelated advertisements,” Rhee and Kim write.

Ignoring digital ads, picking which link to click on next, responding to texts and messages – not to mention multi-tasking between all of these tasks – requires focused attention and concentration. Essentially, using a smartphone during a break might be just as cognitively demanding as work itself, leaving people feeling even more fatigued at the end of their break.

For the experiment, employees at several organizations were sent a self-administered online survey asking them about how they spent their lunchtime breaks. Around 200 people said they usually used their smartphone during their break and 220 individuals said they did other activities that didn’t require any type of screen (i.e., taking a walk, reading a book, chatting with colleagues).

To determine whether people were feeling re-energized after their lunch breaks, participants answered a series of questions assessing their levels of positive and negative affect and detachment from work during their break, and a second survey on energy levels and emotional exhaustion after their break.

Employees who used their smartphone during their lunch break reported significantly higher levels of emotional exhaustion later in the day compared to their peers. Additionally, those who took a regular break (one without a smartphone) reported less negative affect after taking a break. Smartphone users, on the other hand, did not receive a bump in mood after their break.

A growing body of research also suggests that the use of electronic devices, like smartphones, after work may end up impeding sleep by disrupting the secretion of the sleep-promoting hormone melatonin.

“In sum, research to date has consistently shown that mobile device and media usage prior to bedtime is associated with reduced sleep time and quality,” Duke University researchers Madeleine J. George and Candice L. Odgers write in Perspectives on Psychological Science.

Rhee and Kim argue that, although more research is needed, organizations should keep these results in mind. Managers may want to find ways to foster an environment where employees abandon their smartphones in favor of other, potentially more rejuvenating, activities like chatting with friends or taking a walk.