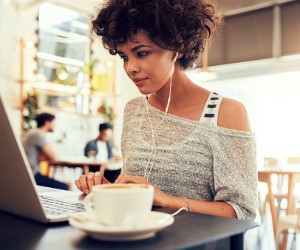 New research might explain why many people who have the option of working from home readily swap out their pajamas for pants and their couch for a seat at the local coffee shop – sitting next to someone busily typing away can increase your own concentration and mental effort.

“In the current study, we showed for the first time that the exertion of mental effort is contagious. Simply performing a task next to a person who exerts a lot of effort in a task will make you do the same,” the researchers write in Psychonomic Bulletin & Review.

For the first experiment, two participants (A and B) were seated next to each other at a shared computer screen and keyboard as they completed a measure called a Simon task. A colored square would appear on either the right or left side of the computer screen; the square could be one of four different colors (blue, yellow, green, or orange). Each participant was assigned two target colors, so whenever a blue or yellow square appeared participant A would press the “k” key and whenever a green or orange square appeared participant B would press the “d” key.

What the 38 participants did not know was that the researchers would be tweaking the difficulty of the task.

It’s much easier for people to process a stimulus that shares a location with the response; so the participant sitting on the left should have faster, more accurate response times when the square appears on the left side of the screen (congruent) compared to the right side (incongruent).

The Simon task isn’t competitive and doesn’t rely on teamwork, but the data showed that when one person was working really hard the person sitting next to them began to work harder as well. When participant A was slogging through the most challenging blocks, participant B’s reaction times and accuracy improved.

“In our study, there were no incentives for exerting high or low levels of effort, but nevertheless participants exert more mental effort when the person next to them was doing so,” the researchers explain. “Thus, subtle effects of effort contagion, as observed in the current study, expose at least one of the boundaries within which people tend to avoid high effort.”