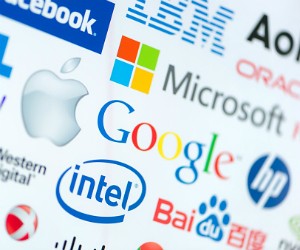 Companies have been known to spend millions of dollars designing their corporate logos – for good reason. A bad logo design can doom a brand.

When the clothing retailer the Gap attempted to refresh its logo in 2010, the reaction from the public and the shareholders was harsh. One Harvard Business Review writer declared, “[T]he logo looks like something my pet hamster could cook up in PowerPoint.”

But new research suggest that there’s more to a logo than its basic aesthetic appeal. The study, conducted by an international team of researchers, suggests that people make complex assessments of a company or product based merely on the shape of the logo.

“Five experiments document that the mere circularity and angularity of a brand logo is powerful enough to affect perceptions of the attributes of a product or company,” the researchers write in the Journal of Consumer Research.

For example, a round logo might evoke associations related to “softness,” including perceptions that a company is caring, warm, and sensitive to customer needs.

In one experiment, 109 college students were asked to rate an ad for a new pair of running shoes. The students were randomly assigned to one of three groups depending on the logo design they were shown: circular, angular, or no logo. All students were shown an ad with a picture of a running shoe with the headline “Introducing the New Farber Shoes.” In the circular- and angular-logo conditions, the ads contained a picture of the shoe with the logo on both the shoe itself and at the bottom of the ad next to the Farber trademark.

After looking at the ad, participants rated the shoe for quality, comfort, and durability using a 9-point scale.

The research team further hypothesized that visual working memory was the mechanism allowing customers to make broad judgments about a product based on a logo design.

When participants were asked to memorize an image before viewing the ad, a task that taxed their visual working memory, they weren’t able to generate the same kind of elaborate judgements about the product: They rated the shoes as equally comfortable or durable regardless of whether they saw an angular or circular logo.

A 2013 study published in Psychological Science shows that logos and branding can have a profound influence on decision-making. Authors Marios Philiastides (University of Nottingham) and Roger Ratcliff (The Ohio State University) found that visible logos and branding on clothing items carried significant value – ultimately biasing decision-making processes in favor of preferred brands.

“It is not sufficient for companies to try to attract consumers with price promotions, good customer support, or product-specific technical requirements (e.g., updates),” they concluded. “Instead, companies should place special emphasis on brand design and awareness and strive to promote strong affective associations with their brand among customers to develop and maintain a competitive advantage.”

This is an awesome article thank you this helped my create a logo for an non-profit organization that helps the victims of sexual assault.