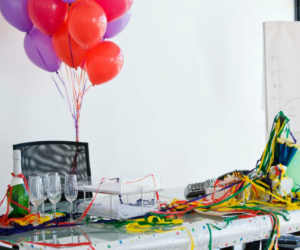 The end of the year is prime time for office parties. From the company picnic to the annual holiday party, office social gatherings are intended to foster team building and camaraderie between coworkers. By providing employees a low-key chance to bond over cookies and punch, managers may believe they’re giving their employees an opportunity to strengthen relationships that will ultimately lead to a more effective workplace.

However, research recently published in the journal Organization Science suggests that office shindigs may actually have serious unintended consequences. According to the research findings, members of racially diverse groups not only reported feeling uncomfortable during office parties, they also felt even more disconnected from their colleagues once the party was over.

“The results are quite ironic,” says study author Katherine Phillips. “Managers think these well-intentioned attempts at promoting diversity and inclusion in the workplace have a positive effect on employees, yet the feedback we received from our study says these exercises are not helping to bridge interracial gaps. This could be a huge roadblock for companies wanting to leverage their full potential in the competitive global marketplace.”

Decades of psychology research have shown that people feel closer and like each other more when they have opportunities to share details about their personal lives. Therefore, managers might assume that office social events give employees a welcome opportunity to get to know each other better. But when researchers Dumas, Phillips, and Rothbard tested this assumption in two studies, they found that office shindigs may not provide the intended experience for many employees.

The first study focused on 228 MBA students and asked them about their participation in social events with colleagues, as well as their levels of closeness with coworkers.

A second study involved a nationally representative sample of 141 full-time employees who filled out online surveys that measured coworker closeness, quality of interactions with coworkers, and enjoyment of office social events.

Both studies indicated that team-building exercises made people feel closer, but only when the co-workers were of similar racial backgrounds.

“In organizational contexts, people may voluntarily participate in social activities with their coworkers or even discuss non-work-related matters, and yet these behaviors can fail to reflect or yield closer relationships among colleagues, particularly when they are demographically dissimilar from each other,” the researchers write.

Findings from the studies revealed that sharing personal information during office social events—what music you listen to, what you like to do on the weekend, or even the cultural references you use—often highlighted personal differences between employees in racially diverse groups.

“We didn’t see a negative relationship — it doesn’t make things worse to socialize with your co-workers. But when you’re racially dissimilar, it doesn’t have the same positive impact,” says lead author Tracy Dumas.

The researchers also found that employees from racial minority groups often attended office get-togethers not because they were a fun way to get to know their coworkers, but out of a sense of obligation or a way to improve their status or performance appraisals at work.

“The takeaway here is not that companies should cancel their office holiday party this month. It is to make sure managers who want to foster closer co-worker relationships know that they need to focus less on the party planning and more on creating a culture that accepts, respects, and assimilates differences between colleagues,” said Phillips. “Managers should pay special attention to the quality of the employee experience during these office gatherings.”

Experts share insights into the factors behind racial bias during police encounters.