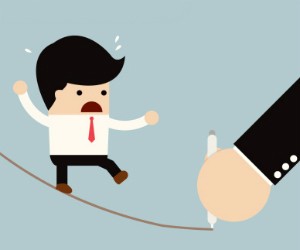 New research finds that a high-ranking supervisor’s unethical misdeeds can trickle down to tarnish the reputations of the upstanding rank-and-file employees working under them.

In the late 1990s, Enron was considered one of the most innovative companies in America, but the fraudulent actions of a few Enron executives resulted in one of the biggest corporate scandals in recent history. Almost 20,000 Enron employees lost their jobs and retirement savings as a result of the company’s collapse in 2001. Adding insult to injury, former Enron employees—who did nothing wrong themselves—have reported that they still struggle years later with public perception that all staff were involved in the company’s corruption.

Sawaoka and Monin noticed that people seemed to suffer more reputational damage when they were associated with an unethical supervisor than with an unethical subordinate. A secretary caught embezzling won’t tarnish your reputation nearly as much as an unscrupulous CEO. The researchers suspected that moral spillover—in which one individual’s bad deeds lead to negative evaluations of others—is influenced by the transgressor’s social rank.

“A transgressor’s social rank magnifies moral spillover, making moral stigma particularly likely to be passed from higher to lower ranking group members,” Sawaoka and Monin write in the journal Social Psychological and Personality Science. “Thus, people may infer that when a higher ranking group member engages in unethical behavior, the whole group is also likely to have poor moral character.”

The researchers set out to test this phenomenon with a series of four online experiments, looking at people’s responses to vignettes based on real-life ethical scandals.

In one experiment, 118 participants read a news article about a scandal in which a stockbroker named Brett was charged with fraud. Brett was accused of charging clients bogus fees for trading orders and then pocketing the extra revenue himself. One group of participants read a scenario in which Brett was described as a high ranking executive, while the other group read that he was an entry-level employee.

Participants then evaluated a job applicant, “Luke,” who was formerly an employee at the same financial organization as Brett. After reading a mostly positive reference letter about the job applicant, participants had to decide whether or not they would recommend hiring Luke for a mid-level job.

The researchers were surprised at how much the mere association with scandal could elicit distrust and suspicion.

“We found that people made significantly more negative hiring recommendations for this employee after they read that a high-ranking executive (rather than an entry-level employee) from this organization had committed fraud — even though there was no indication that the two had ever worked together or even knew each other,” Sawaoka and Monin write.

This research suggests that people perceive high-ranking organization members, such as CEOs or supervisors, to be more prototypical of the moral qualities and characteristics of the rest of the organization compared to low-ranking employees.

“People assume that if the leader is corrupt, then the organization must be corrupt, and therefore all other employees must be corrupt as well,” the researchers conclude. “That we observed reliable moral spillover effects using this paradigm speaks to how easily and quickly people form moral impressions of others based on limited information.”

One direction for future research is to investigate tactics people can undertake to reduce this kind of moral stigma.  For example, employees may be able to protect their reputations after a scandal by emphasizing the ways in which a corrupt leader was not representative of the organization as a whole. Another strategy could be to downplay the social status of the transgressor; the lower the perceived status of the swindler, the less the damage to an organization’s moral character.