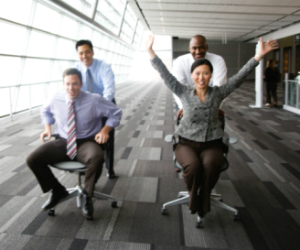 Humor in the workplace can foster a positive atmosphere that helps coworkers bond, but jokes in the office can also fall flat, hurt feelings, and can even lead to lawsuits. A new study finds that leaders who strike the right balance, laughing at themselves but not their colleagues or underlings, may be seen as more likable, trustworthy, and caring.

Researchers Colette Hoption (Seattle University), Julian Barling (Queen’s University), and Nick Turner (University of Manitoba) hypothesized that, regardless of whether people actually thought a leader was funny, self-deprecating jokes would be seen as an expression of a leader’s values and concern for others.

“We chose humor as a mechanism through which leaders express their concern for others (vs. the self) because of the potential for humor to be both a weapon to harm others and a tool to build relationships,” the researchers write in the Leadership & Organization Development Journal.

Leaders who focus on the well-being of others, known as transformational leadership, are more likely to earn the trust and good will of their employees. Poking fun at themselves may be one way in which leaders can de-emphasize differences in status between themselves and their employees, providing evidence of their concern for others.

Although there were no differences between the conditions in ratings for how funny the leader was, the self-deprecating leader received significantly more positive ratings for trustworthiness and leadership ability. Additionally, the leader using aggressive humor received a worse evaluation than the leader who used no humor at all.

“Thus, it is important to reiterate that the perception of transformational leadership may be less dependent on how funny leaders are perceived to be, and more dependent on what the type of humor indicates about leaders’ values,” writes Hoption and colleagues.

The researchers caution that too much self-deprecating humor may backfire, coming across as insincere or fake. They also note that more research is necessary to generalize the results of the study – for example, the young sample of study participants may be biased towards certain types of humor compared to a more mature sample.  Future research may benefit from using alternative stimuli, such as video clips of leaders, which can provide insight into the effects of factors like body language and audience response to deprecating humor.

Thank you. It’s a beautiful article but the most important quality of a leader is to be strong.