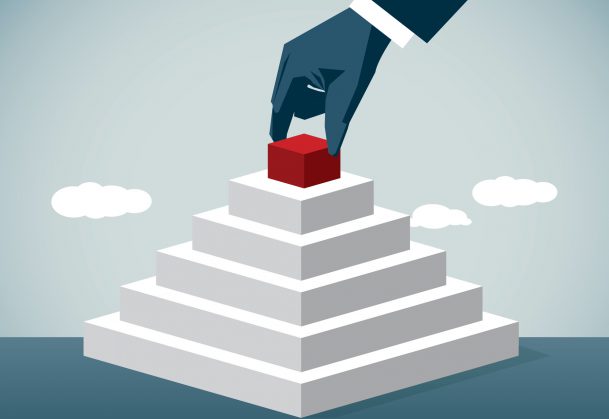 In most organizations, leaders are expected to monitor – and stop – unethical practices taking place under their watch. But history is full of examples of high-ranking leaders who turned a blind eye to illegal or unethical behavior. For example, Stewart Parnell, a Georgia peanut company CEO, was sentenced to 28 years in prison for knowingly shipping peanuts tainted with dangerous levels of salmonella to customers. The contaminated peanuts killed nine people and sickened hundreds.

“When unethical practices occur in an organization, high-ranking individuals at the top of the hierarchy are expected to stop wrongdoing and redirect the organization to a more honorable path—this is, to engage in principled dissent,” the researchers explain.

But Kennedy and Anderson hypothesized that occupying a high-ranking role within an organization might cause people to identify more strongly with their organization and thus “they fail to see unethical practices as being wrong in the first place.”

For several reasons, studying principled dissent (and consequently unethical behavior) in the real world is incredibly difficult. But the researchers were able to obtain a unique set of data: a large sample of whistle-blowing data provided by over 11,000 government employees. The US Merit Systems Protections Board conducted a private, anonymous survey across 22 federal government agencies in 1992. The survey included a broad range of questions on whether employees had engaged in whistleblowing, or had reported any unethical or even illegal activities by their coworkers and colleagues.

Overall, around 16% of participants indicated they had reported illegal or unethical activities involving their agency to at least one party in the previous year. And rank seemed to matter when it came to who was making these reports.

“Employees in high-ranking positions were less likely to report unethical practices than those in low-ranking positions,” Kennedy and Anderson write. “This relationship held up even after controlling for a host of variables that also had a significant relation with principled dissent, including gender, ethnicity, education, tenure with the organization, age, and knowledge of protections from retaliation.”

A second pair of experiments carried out in the lab helped to establish a causal link between principled dissent and organizational status.

In one study, participants were assigned to either a high-, middle-, or low-ranking position within a small group of four, ostensibly based on points assigned by other group members. In reality, each person’s leadership position within the group was randomly assigned by the experimenters. Participants also responded to a series of positive and negative statements designed to either encourage or discourage identification with their group.

Participants were then presented with a business school ethics case study: As employees for Plasma International, a blood supply company for hospitals, they had to decide whether to increase the price of a pint of blood from $50 per pint to $100 per pint after a major disaster dramatically increased the need for blood. While seated separately at computer terminals, participants saw a series of chat room messages either unanimously calling to take advantage of the heightened demand by raising the price, or unanimously calling to maintain the current price. Participants were told they were chatting with their teammates in real time, but these chat messages were actually standardized responses composed by the researchers.

The chat conversation revealed that high-ranking individuals were not apt to use their power to quash unethical behavior.

Instead, the results showed that “high-ranking individuals engaged in less principled dissent in part because they identified with the group more than those with low-rank.” Interestingly, leaders simply didn’t see an ethical issue; high-ranking individuals were less likely to perceive their group’s behavior as unethical relative to lower ranking group members.

“Consequently, although high-ranking individuals are better enabled psychologically and politically to engage in principled dissent, they may fail to do so because they see no problem with their organization’s unethical practices in the first place,” the researchers conclude.

I am curious to learn the next steps after your study- that is, do organizations actually CARE re: the occurance of unethical behaviors? The danger of exposure and/or liability can likely be a deterrent, however, those in power would need to have interest in establishing a culture of ethical decision making as well as necessary education related to ethics. As the researchers, do you have vision as to where your results move next?

It would be interesting to know if this applied in military, police and health hierarchies as well as in business

The “flaw” in the study is sample 1. The author used 25 year old data to bolster the argument. What if behaviors have changed in the federal government due to policy changes such as the Whistleblower Act and NoFear mandatory training. I agree with the hypothesis but the data used in sample 1 sends the wrong message. It’s 2017 not 1992. This study would have benefited from recent data.