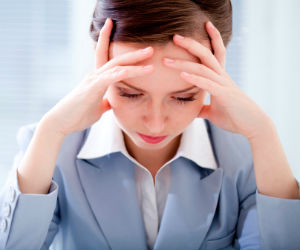 Depression can have a dramatic impact on a person’s ability to work. According to statistics from the CDC, approximately 27% of people with depression reported serious difficulties in work and home life and 80% of people reported some level of functional impairment because of their depression.

Workers suffering from depression will miss an estimated 200 million workdays each year at a cost to employers of $17 to $44 billion.

While previous research has shown that workplace stress may be a risk factor for developing depression, a recent study from researchers at the University Of Melbourne and the Menzies Research Institute at the University of Tasmania found that depressed employees may actually benefit more from going in to work than taking sick leave.

“We found that continuing to work while experiencing a depressive illness may offer employees certain health benefits,” says lead author Fiona Cocker, “while depression-related absence from work offers no significant improvement in employee health outcomes or quality of life.”

The study, published in the journal PLoS One, is novel in that it compares the outcomes and long-term costs between depression-related absences and continuing to work among Australian workers.

The researchers used data from a mental health survey of nearly 9,000 people conducted by the Australian Bureau of Statistics to estimate rates of depression and employee outcomes.

Cases of absenteeism were defined as workers who indicated on the survey that they had taken time off over the past 12 months because they were unable to work or carry out normal activities as a result of their depression symptoms. Cases of presenteeism — continuing to work when ill – were defined as workers who indicated symptoms of depression, but did not report taking any days off of work as a result.

The researchers calculated the costs of absenteeism and presenteeism based on estimates of lost productivity, expenses associated with medication and use of health services, and the cost of replacing absent employees.

The results indicated that the potential benefits of coming into work, such as reduced use of antidepressant medication, may outweigh possible negative health outcomes and economic costs.

Cocker and colleagues theorized that emotional support from co-workers and maintaining a daily routine may improve quality of life for people suffering from depression. However, the researchers were unable to determine whether people who missed work because of their depression might also have experienced more severe symptoms in the first place.

The type of job a depressed worker was also associated with their health outcomes. Depressed workers in white collar jobs reported poorer quality of life and higher costs compared to blue collar workers.

Cocker and colleagues say that a better understanding of the costs and consequences of absenteeism and presenteeism could allow companies to improve workplace policies for employees. For example, companies could offer more flexible work options, such as working from home or working reduced hours, rather than a choice of coming in full-time or not coming in at all.

The researchers note that these findings have the potential to be extended to other health conditions like diabetes or heart disease that can impact attendance.

“This is important information for employers, health care professionals (e.g. GPs) and employees faced with the decision whether to continue working or take a sickness absence,” says Cocker. “It suggests that future workplace mental health promotions strategies should include mental health policies that focus on promoting continued work attendance via offering flexible work-time and modification of tasks or working environment.”