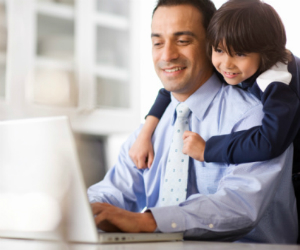 It makes sense that a family argument at the breakfast table could sour someone’s mood in the office, impacting their performance at work. But new research suggests that, for supervisors, experiences at home don’t just spill over to their lives at work, they can actually become “contagious” throughout the rest of the office.

The study, from psychological scientists Lieke L. ten Brummelhuis, Jarrod M. Haar, and Maree Roche, found that leaders’ emotions about home life – whether positive or negative – can trickle down to their subordinates in the office.

“Our results underscore that leaders’ family life matters at work, influencing not only their own well-being but also how they motivate and support their followers,” says ten Brummelhuis and colleagues.

Both our home lives and our work require us to use our limited resources of time and mental energy, so that someone coping with high demands at home is likely to have fewer emotional and mental resources available for dealing with stress at work. A supportive and enjoyable home life can help people re-charge their mental batteries, allowing them to come into work feeling energized and motivated.

With this in mind, the researchers hypothesized that bosses who felt stressed out at home were likely to report negative feelings, like exhaustion and cynicism, about work. In contrast, leaders who reported positive home lives were expected to bring their good moods into the office, as well as offering more support and encouragement to their subordinates.

The researchers expected that a boss’s positive or negative affect was then expected to trickle down to their subordinates, ultimately leading workers to match the negative or positive outlooks of their boss.

For the study, the researchers surveyed 199 leaders from different industries across New Zealand. The leaders were first given a survey to assess their levels of family-work conflict (i.e., because I am often stressed from family responsibilities, I have a hard time concentrating on my work) and family-work enrichment (i.e., my involvement in my family puts me in a good mood and this helps me be a better worker).

One month later they were given surveys assessing their feelings of job burnout, work engagement, and positive and negative affect.

A group of 456 of these leaders’ subordinates were then given a survey rating their supervisor’s supportive behavior and asking about feelings of job burnout, work engagement, and positive and negative affect.

And the boss’s home life reverberated in reports from their subordinates. Employees who had a boss with a happy home life reported feeling more positive and engaged at work, while those with frustrated bosses reported higher rates of negative affect and symptoms of burnout.

“In other words, our findings suggest that burnout and engagement can go from one person to the other because burned-out individuals express more negative emotions that are caught by others,” the researchers write in the journal Personnel Psychology. “Engaged individuals send out more positive emotions, eliciting similar positive emotions in receivers.”

The researchers cautioned that it’s possible that the general mood of the office could have been influenced by additional factors, such as a generally stressful or unpleasant environment, although they attempted to control for certain workplace variables, including hours worked and general job satisfaction.