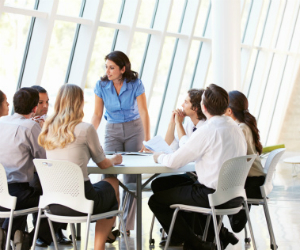 Women in leadership roles can feel like they’re in a bind. As leaders, they’re expected to be strong and decisive. As women, they’re often expected to be nice, nurturing, and cooperative. While a male leader may be praised for a take-charge attitude, a woman may be called bossy or abrasive for the same behavior. It’s no surprise that many women in leadership roles feel that the expectations for their behavior in these two roles are often at odds.

However, a recent study from psychological scientists Natalia Karelaia of INSEAD and Laura Guillén of the European School of Management and Technology found that female leaders may benefit from holding positive perceptions of themselves as women.

“Our research identifies an important ingredient for a successful adaptation of women leaders to their professional roles: positive gender identity,” the researchers write in the journal Organizational Behavior and Human Decision Processes.

The researchers found that women with more positive perceptions of their gender identity – the social and cultural expectations associated with one’s gender – experienced less of a sense of conflict between being a leader and a woman. Women who felt less of a clash between their identities as women and leaders reported less stress and more positive views on leadership roles.

In the first of three experiments, the researchers had a diverse group of female business school graduates complete assessments on gender identity, leadership identity, and identity conflict between the two.

In a second study, 65 women leaders were randomly assigned to either a positive gender identity condition or a control condition. The women in the positive gender identity condition were asked to think about ‘‘specific reasons that made them and/or others think positively of women’’ before completing a writing exercise. Participants in the control condition were asked to focus on ‘‘reasons that made them and/or others think negatively of women’’ before their writing assignment.

For the third study, over 600 women in leadership positions responded to an online survey where they answered the same assessments on their gender and leader identities as in the first study. They also completed measures on psychological well-being, life satisfaction, and perceived stress.

Across all three studies the researchers found that women with a more positive gender identity reported less identity conflict, better psychological well-being, and a more positive view of leadership roles.

“It is possible that positive gender identity allows women leaders to not only feel more confident and authentic in their role, but also to be perceived as effective without being punished for behaviors that do not conform to stereotypical leader behaviors,” write Karelaia and Guillén.

The researchers also found that women had more positive perceptions of gender identity when there were other women leaders working in their organization, while women in environments in which they’re numerically underrepresented may be less likely to see themselves as leaders.

“Our findings suggest that organizations that commit to developing and retaining female talent should consider not only interpersonal attitudes toward female leaders, but also intrapersonal processes related to women leaders’ self-perception.”