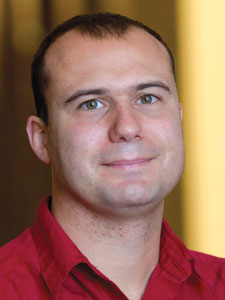 I am fascinated by the tremendous variation in sexuality that is observed across the world, across historical time, within each sex, and even within a given individual over time. My work is part of a broader interdisciplinary attempt to understand the ways that evolved physiological and psychological systems interact with social influences to shape behavior and preferences. My research examines questions such as: How did evolutionary processes shape the human body and mind? How have shifting gender roles changed the nature of romantic relationships?

My original dream was to become a researcher chasing monkeys across Africa. I was intrigued by the differing patterns of male-female relationships across different primate species, and how these patterns were tied to both the evolutionary history of the given species as well as the current ecological circumstances. Ultimately I was drawn to the study of evolutionary perspectives on the mind, behavior, and sexuality. This is a particularly engaging time to conduct this work. Although approaches that integrate evolutionary approaches have gained a foothold in psychology, there is still a great deal of controversy regarding these perspectives, and it is exciting to add to this growing area by integrating perspectives from biology, psychology, anthropology, and women’s studies.

Two feminist primatologists, Sarah Hrdy and Linda Marie Fedigan, captured my attention with their fascinating books on primate social behavior and their critical analyses of assumptions about gender and behavior in primates (The Woman that Never Evolved and Primate Paradigms). As an undergraduate, Gordon Gallup and Steven Platek played a big role in shaping my interest in evolutionary perspectives on sexuality. As a graduate student, I was fortunate to have two exceptional mentors at UCLA in Anne Peplau and Martie Haselton, who dedicated a tremendous amount of time to helping me learn how to write effectively and develop research studies testing an overarching theory. Forging collaborations with anthropologists (Dan Fessler, Clark Barrett), sociologists (Janet Lever, Abigail Saguy), and psychologists (Viren Swami, Gordon Forbes, Janet Latner, Elaine Hatfield) provided an exciting opportunity to learn a variety of methods and theoretical perspectives and to develop an interdisciplinary approach to research. Finally, I am indebted in particular to Neil Malamuth and Tara Scanlan for helping me develop my approach to teaching.

One question that has recently captured my attention is why some gendered traditions have been more resistant to change despite the move towards gender equality across the past 50 years. For example, when it comes to choosing the family surname upon marriage or who pays for dates early in courtship, are people following traditional norms, egalitarian norms, or crafting some sort of compromise between the two? Second, along with Abigail Saguy, Kjerstin Gruys, and Traci Mann, I am examining how different narratives regarding medical perspectives on body weight in the news media impact attitudes towards fat men and women as well as obesity-related public policies.

When I entered graduate school, I didn’t want to fall into the trap of relying solely on the captive population of Western college students who serve as the main fodder for psychological research. But without much funding, the prospects of recruiting sizeable samples of free-ranging humans seemed limited. I made it my goal to find ways to gather these samples, first by partnering with NBC News to conduct surveys via their official website, and second by recruiting samples from collaborators with research sites across many societies. The publication I am most proud of was based on the International Body Project that Viren Swami and I co-organized, where we examined preferences for body types in 41 sites in 26 countries across 10 world regions. This study showed just how widespread thinness norm has become for women, with plumpness valued primarily in rural sites in non-industrialized countries.

David, we are so proud of you and love you very, very much.