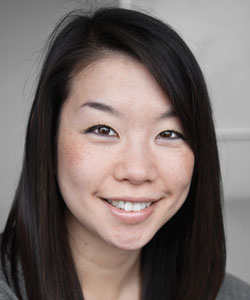 Eating is the thread that ties all of my research together. I study the way we eat (whether that’s overeating in response to things like stress, or not eating, meaning fasting and dieting) and how that makes us healthy or unhealthy. As a health psychologist, I tend to examine biological outcome variables like the stress hormone cortisol, or telomeres, a biomarker of aging represented by the length of the caps that protect chromosomes. As a social psychologist by training, I also care deeply about stigmatized populations, and that manifests itself in my work focusing on weight stigma and health disparities in obesity.

I was first fascinated by anorexia nervosa. As a person who will eat anything and everything — and ask for seconds — I was flummoxed by this disorder where individuals would willingly starve themselves. As I surveyed the landscape of American (and worldwide) health, however, I realized that I could make a bigger impact by studying the processes that govern overeating and dieting. Everyone eats, and practically everyone has been on a diet, and I love that I can talk to anyone, psychologist or not, about my research. My research is also exciting because in the middle of it is a giant paradox. Calorie restriction extends lifespan dramatically in other species like worms, fish, and rodents, and I’m researching whether that might be the case in humans as well. But on the other hand, a lot of my other work concludes that dieting probably isn’t good for your health. I’m sure it will take me many years to get to the bottom of that one.

I am so lucky to have a career surrounded and supported by strong, brilliant women scientists. Traci Mann, my graduate advisor and favorite person on earth, taught me that science was fun. This was a precious gift, because working now never feels like a chore. Elissa Epel, my postdoctoral advisor, is my hero because she bravely chased a risky hypothesis — that psychological stress could be linked to something as tiny as a cluster of base pairs on the end of a strand of DNA — and single-handedly launched a new field of research. Traci and Elissa are alike in that they are meticulous methodologists, scarily smart, and above all warm and lovely individuals. My academic treasure chest is filled with other eminent female role models: Nancy Adler, Gretchen Chapman, Mary Dallman, Barbara Laraia, Brenda Major, and my UCLA colleagues Julie Bower, Naomi Eisenberger, Chris Dunkel-Schetter, Rena Repetti, Jenessa Shapiro, Annette Stanton, and Shelley Taylor.

I think I’ve greatly benefited from the right-place-at-right-time phenomenon. Health psychology is a rapidly growing field. There is an obesity “epidemic.” Funding agencies are prioritizing interdisciplinary research. These things have conspired to make my work particularly relevant. My mentors and colleagues can take the rest of the credit. The only thing I could attribute to myself is that the first thing I do every morning is write for an hour. And getting a flu shot every year.

Eating is such a wonderful, pleasurable thing, and it gets a bad rap. I hope to pursue research that tests how we can harness the power of eating to make our lives healthier and happier.

This paper sparked my motto of “fifth journal’s the charm.” Even though it was just a review of dieting studies, we were told over and over again that the paper was too controversial. Finally, it landed with Robert Kaplan, another person I consider one of my role models, who was associate editor of American Psychologist at the time. He said that he thought the paper was important, but recognized that it would be an uphill battle to get published. He proposed to invite an opposing piece and said he would write a bridging editorial. Only with that extraordinary intervention did this paper see the light of day. This experience taught me to have a tough skin, to be persistent, and to not be fearful in those “emperor has no clothes” moments.