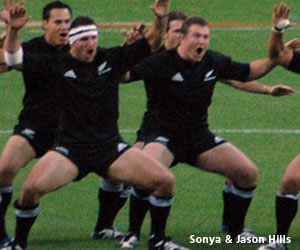 The rituals that athletes count on to win might be more than just mere superstitions.

Five days left, 5 psychological science highlights: Counting down to the Olympic Opening Ceremony, with research insights on sports and performance.

Have you seen Michelle Jenneke’s prerace routine? How about Stephanie Rice before she swims? When a event begins, there is no telling how it will end. How can players cope with the unpredictability Olympic competition? The rituals that athletes count on to win a tip off or sink a game-winning shot — like the college basketball shorts Michael Jordan used to wear under his NBA uniform — might be more than just mere superstitions.

Gregg Steinberg, Austin Peay State University, studies human performance in sports. From his time as an athlete, he noticed that the best players had a handle on their emotions and could rebound from bad breaks. And one seemingly silly tool athletes use to cope is good luck charms.

“Athletes…never know how they’re going to play, how the other team is going to play,” said Steinberg in a CNN article. “So when you do something that’s superstitious, like wearing a trinket, it gives you a greater sense of control.”

Research published in Psychological Science supports Steinberg’s statement. Superstitions are typically seen as irrational or inconsequential, but many people rely on superstitious thoughts and practices in their daily routines.

Psychological scientists at the University of Cologne found that participants who had a lucky charm demonstrated improved performance in golfing, motor dexterity, memory, and anagram games. The authors proposed that being in the presence, versus the absence, of a personal lucky charm, leads to improved performance by boosting people’s belief in their ability to master a task, or self-efficacy. The boost in self-efficacy from a lucky charm in turn leads to higher self-set goals and increased persistence, which both further improve performance.

So whether you wear lucky underwear, grow a playoff beard, listen to pre-game pump-up jams, do the Haka dance or a slow clap, the science so far shows that observing these rituals will help you bring your A game, no matter how obscure or silly they may seem.

Maybe there is a lesson in this research that in managing human emotions in high-stakes performance situations attempting to placate the invisible forces of magic isn’t necessarily bad, but at the same time maybe an understanding of the psychological forces involved might produce better practices than superstition…for channeling run-away emotions and motivation.

It is well known that athletes can sometimes be so highly motivated and anxious that they clutch, but is the helpful effect observed for superstitions really a matter of “self-efficacy” created by an “illusion of control”, or is it really just a direct reduction in anxiety to a manageable level by knowing that everything possible (including performing the ritual or wearing the magic charm) has been done. After all, if the athlete or team does fail it won’t be because some magic stone was left unturned.

Superstition might be tried experimentally alongside some other more “rational” anxiety-reducing technique, like meditation or cognitive restructuring … but it might be difficult to come-up with something that wouldn’t also involve self-efficacy. It seems to me that it is possible that in such an experiment the superstitious practices could beat rational practices, if the key variable is “strength of belief”, and not rationality.

information from this paper was so informative. the silly rituals done by athlete prior, during and after the game have a motivational effect.