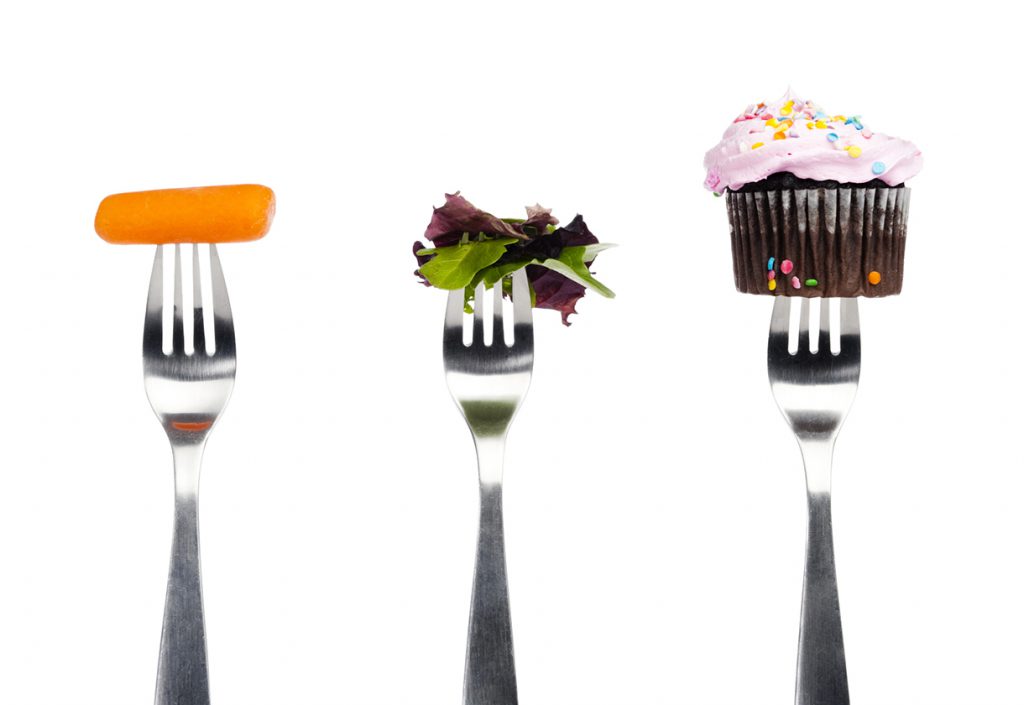 Every January, many people will pledge to make healthier food choices a priority for the upcoming year—swapping out that slice of chocolate cake for a bag of carrot sticks. But, keeping that healthy eating resolution isn’t so easy when we’re actually faced with choosing between rich, delicious cake and crunchy carrots.

A new study from Caltech psychological scientists Nicolette Sullivan, Cendri Hutcherson, Alison Harris, and Antonio Rangel may help shed some light on exactly why that decision can be so hard.

The study, published in Psychological Science, shows that tiny differences in brain processing speed may account for big differences in our ability to stave off temptation and opt for the healthier snack.

When choosing between cake and carrots, our brains have to process the various aspects of the food: whether it’s going to taste good, how many calories it contains, or whether it’s high in sodium content. Sullivan and colleagues hypothesized that the brain is able to process factors that are concrete, such as tastiness, more quickly than factors that are relatively abstract, such as healthfulness.

“We found that subjects’ ability to factor health into their decisions was related to the speed with which taste, versus health, began to influence their choice process,” says Sullivan. “That is, the larger the ‘head start’ taste had in the decision process, the more likely subjects were to make a poor choice.”

To test this theory, Sullivan and colleagues developed a novel technique that allowed them to evaluate exactly when the factors for tastiness and healthfulness came into play during the decision making process.

By tracking the movement of a computer mouse as a person made a choice between two foods, the researchers were able to evaluate decision making processes on a scale of milliseconds.

In the experiment, 28 students who had been fasting for 4 hours were asked to rate 160 foods for healthfulness, tastiness, and how much the subject would like to eat that food after the experiment was over. They were then presented with nearly 300 random pairings of these same fruits, candies, chips, and granola bars. After two randomly selected foods came up on a computer screen, the participants used a computer mouse to select which of the two foods they preferred.

By using statistical tools to analyze each subject’s cursor movements, the researchers could observe how quickly health and taste came into play during the decision making process.

The results confirmed the researchers’ hypothesis that on average taste information began influencing the choice process earlier than health information by about 200 milliseconds. Interestingly, health information didn’t influence food choice at all for around 30 percent of the subjects; the movement of their mouse cursor was driven by taste every single time.

The researchers found that participants who demonstrated high self-control, frequently picking the healthy items that were presented, began to factor health information into their choices 323 milliseconds sooner than those with low self-control.

“This suggests,” says Sullivan, “that the more quickly someone begins to consider a food’s health benefits, the more likely they are to exert self-control by ultimately choosing the healthier food.”

Sullivan and colleagues are interested in extending this research to see how their findings could be applied to other arenas of self-control, such as saving money versus spending money, or deciding between an act of altruism versus an act of selfishness.

“Our findings suggest that adding a waiting period before choice may allow health information a chance to ‘catch up’ in the comparison process,” says Sullivan. “Techniques that may prompt faster processing of health information, such as posting calorie counts prominently on menus, may encourage better choices through this timing mechanism.”