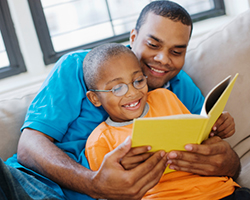 In order to be a successful reader, one needs to not only be able to identify individual words, but also to create an ongoing representation of the events described throughout a text. One way this continuity is accomplished is though anaphor resolution. An anaphor is the word that refers to something that was previously introduced within the text. Take the following example:

The processes that are involved with bonding and resolution are resource-heavy and may depend on skills that develop as people age. Studies of anaphor resolution in adults have found longer reading times for sentences that have anaphors farther away from their antecedents and for antecedents that are less typical. For example, a truck (a typical antecedent) has more of the traits we would generally associate with a vehicle (the anaphor) than a construction crane (an atypical antecedent) has. In contrast to what is known about anaphor processing in adults, less is known about anaphoric resolution in children — especially processing that occurs as children are actively reading.

The researchers tracked the eye movements of 10- and 11-year-old children as they read short passages, such as the example above that described the builders and the truck. The authors manipulated the distance between the anaphor and its antecedent by placing them in consecutive sentences (near) or one sentence apart (far). The researchers also manipulated the typicality of the antecedent, for example, using the antecedent “truck” (typical) or “crane” (atypical). The children also were assessed for reading comprehension and verbal working-memory ability.

An examination of the eye movements the children made in the anaphor and postanaphor regions of the text suggested that anaphor processing begins when children look at the word and continues after their eyes have moved onto the postanaphor region. The results also suggested that children failed to resolve the most demanding type of anaphor — atypical ones far from their antecedents — perhaps because this process is too demanding for children of these ages.

Although much more remains to be discovered about how children process anaphors — and the way this skill develops — this article provides an important look into the way children read and comprehend text.