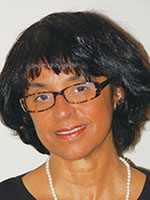 APS Board Member Sandra Graham was among the eminent researchers who presented findings on May 10 from a new National Academy of Sciences, Engineering, and Medicine report on school bullying, including the burgeoning and complex cyberbullying phenomenon. Graham, whose research interests include the social interactions and academic behaviors of children of color, holds the Presidential Chair in Education and Diversity at the University of California, Los Angeles. She also has published a broad variety of articles in developmental, behavioral, and educational psychology journals.

Rivara explained that the task force compiling the report used the Centers for Disease Control and Prevention definition of bullying: behavior that is aggressive, involves an observed or perceived power imbalance, and occurs multiple times. Graham addressed the most important factors that affect bullying, as well as some effective intervention strategies.

A school’s culture can play a significant role in encouraging or thwarting bullying, she said. For example, research suggests that when children perceive discipline as fair and as being meted out with warmth and support (e.g., with the aim of improving behavior rather than punishing mistakes), they are less likely to engage in a culture of bullying.

Cyberbullying, she emphasized, is a new realm of concern for psychological scientists because it happens in a different context from in-person bullying: “You have this 24/7 experience, and it’s really hard to get away from that. It’s hard to figure out how you will come to the aid of a victim of bullying when it is happening all the time. These viral experiences completely change the meaning and experience of repeated exposure to victimization, and the anonymity of it is hard to articulate.”

Graham also reminded attendees of the health consequences associated with bullying of any kind. These include physical stress (e.g., sleep problems, gastrointestinal problems), mental health consequences, and educational difficulties. Research also suggests that the same areas of the prefrontal cortex that are activated by physical pain also are activated by social pain, she said, underscoring the serious threat such prolonged harassment presents.

Graham and the other researchers emphasized the importance of intervention programs targeting people who interact with children in the educational community (e.g., teachers, school officers, mentors) as well as those aimed at parents.

“It is up to the school to be doing more proactive efforts to teach tolerance to kids who are different from you,” she said. “We’re in an increasingly racially and ethnically diverse country, and we need to be able to learn to live and accept and get along with people who are different than us.”

To learn more about the report and its findings, click here.

As a researcher, adviser, and science communicator, APS Fellow Dorothy Espelage is raising awareness about effective strategies for preventing bullying and youth violence.