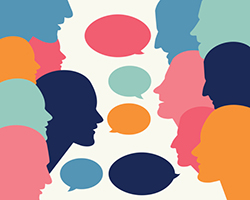 This event was supported by the APS Fund for Teaching and Public Understanding of Psychological Science, which invites applications for nonrenewable grants of up to $5,000 to launch new, educational projects in psychological science. Proposals are due October 1 and March 1.

Support for excellence in the teaching of psychology in the United States is stronger than anywhere else in the world, say psychological scientists Dana Castro (L’Ecole des Psychologues Praticiens [EPP], France) and APS Fellow Douglas Bernstein (University of South Florida). English-speaking psychology teachers can benefit from the written advice and resources on US websites to enhance the quality of their teaching, but this information is inaccessible to those in non-English-speaking countries. Comparable advice and resources simply are not available in other languages, and psychology organizations and many countries do not have focused efforts to support the improvement of teaching. With support from the APS Fund for Teaching and Public Understanding of Psychological Science, Castro and Bernstein are working to improve the international dissemination of resources for teachers of psychological science.

The researchers selected an array of teaching-related articles and other written resources that they believed would be particularly useful to those teaching psychology in French, had them translated into French, and posted them on both the EPP and APS websites. Thirteen articles, many of them from APS journals, have been translated so far. Two of these were written especially for this project: one by Sandra Goss Lucas (University of Illinois at Urbana-Champaign) and Bernstein and the other by APS Fellow William Buskist (Auburn University) and Jared Keeley (Mississippi State University).

Additional funding was provided by the Society for the Teaching of Psychology and Cengage Learning Corporation, and the project directors plan to continue posting translated articles approximately once a month. With regular future funding, they hope not only to expand the list of articles that will be available in French, but also to increase the project’s scope by translating the articles into Portuguese and Spanish in cooperation with psychological scientists who speak those languages.

I teach Psychology in Marathi & English . I’m fluent in Hindi & English but don’t know French. I can translate an article in these languages.
With regard ,
Anita Shelke