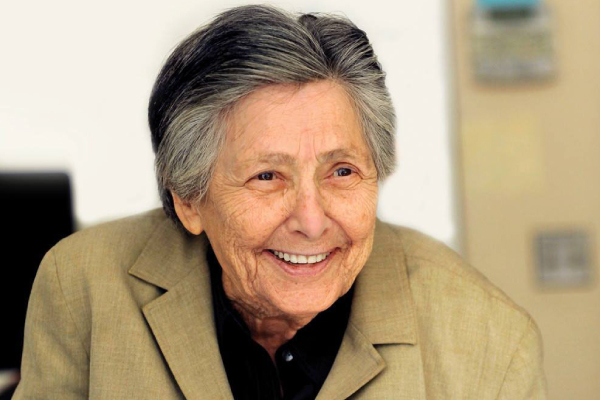 APS Fellow Lila Gleitman didn’t set out to become an internationally recognized expert on developmental psycholinguistics and language acquisition. On her first day job-hunting after graduating from college in 1952, the Brooklyn native accepted a job as what was then known as a “gal Friday”—a low-level female office assistant—for the journal of the American Water Works Association in New York City. A male friend of hers, who began his search the same day with no more credentials than herself, returned home as an assistant editor at a prestigious publishing company. The disparity “was not even noticeable to us,” she told APS Past President Susan Goldin-Meadow in their 1997 Inside the Psychologist’s Studio interview. “We toasted each other to the wonderful jobs.”

Gleitman, who died August 8 at age 91, quickly moved on from that job to a celebrated career in psychological science. “My life was a series of accidents,” she told Goldin-Meadow. From a chance trip to visit friends, she met Eugene Galanter, at the time an assistant professor at the University of Pennsylvania (UPenn). The two hit it off and later married, which allowed Gleitman—as the wife of a faculty member—to take classes at the university for free. She fell in love with the Greek culture and language, which led to studying with Zellig Harris, who inspired her interest in linguistics and her eventual master’s degree and PhD from UPenn. She went on to serve as a professor of psychology there for 30 years, retiring in 2002 as a professor emerita of psychology and linguistics. Her second husband, Henry Gleitman, also a longtime psychology professor at UPenn, died in 2015.

In her long career, Gleitman’s empirical work helped to unravel the mysteries of how children learn language—the endowments they bring as well as the processes involved in acquiring the languages they learn. “My work has concerned the mental lexicon and its interface with syntax, language acquisition, and the relation between language and thought,” she explained on her UPenn web page. In practical terms, this meant helping to explain how young children identify verb meanings and process sentences, why verbs are learned more slowly than nouns, and how deaf children create communications that reflect the same structure found in spoken language.

Yet despite the high-minded elegance and complexity of her research, Gleitman remained remarkably down-to-earth. In her 2017 conversation with Goldin-Meadow, she speculated that her “chief accomplishment in life” was being “the gal who put the word [the F-word] in the dictionary”—an actual outcome of a project decades earlier, when the then-graduate student worked with Harris to write the psychological entries fora revised edition of Webster’s dictionary. For her part, Goldin-Meadow recalled meeting the older scientist for the first time in 1971. After Goldin-Meadow proudly described her honors thesis in elaborate technical detail, “Lila asked me why I did the project,” she remembered during their 2017 interview. “It was the first but not last time Lila taught me that doing a study elegantly and carefully is important, but knowing why you did it is even more important. You should be able to explain the purpose of a study to anyone,” she explained, “preferably in terms that your grandmother can understand. This was a fundamental lesson about science that I learned from Lila even before I started paying tuition.”

Gleitman was honored with numerous awards in recognition of her research, including fellowships in APS, the Society of Experimental Psychologists, the American Association for the Advancement of Science, the American Academy of Arts and Sciences, and the National Academy of Sciences. In her speech for the inaugural APS Mentor Award in 2013, which recognized her for significantly fostering the careers of others, she thanked her own mentors, including Harris, and reflected on the “great joy” of working with hundreds of graduate students and postdocs over the years.

More about Lila Gleitman from APS

Inside the Psychologist’s Studio interview with Susan Goldin-Meadow

Among Lila’s many accomplishments was that she coined the term “meta-cognition” (with a hyphen, but still) in a paper on “The Child as Grammarian” written with Henry Gleitman and Liz Shipley (Cognition 1972). Also “meta-language”. This was several years before the concepts of “metacognition” and “metamemory” began appearing elsewhere in the literature, with the same meaning.