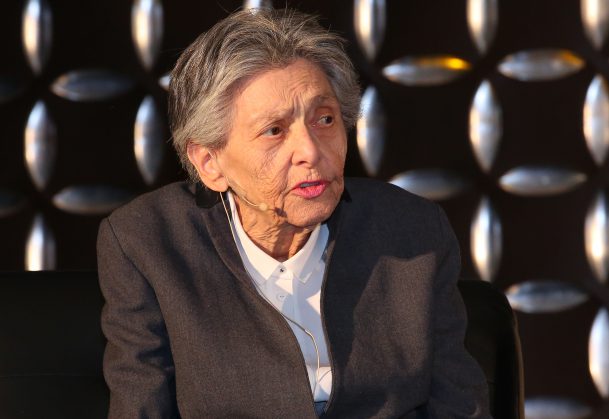 In tracing how and when humans first used tools, discovered fire, and evolved from living in hunter–gatherer groups to farm-based societies, scientists have at their disposal an abundance of physical evidence in the form of fossil records.

The story is quite different, however, for scientists investigating how and when the species developed what some view as one of its most quintessentially human traits: the ability to use language to communicate.

Gleitman, a professor emerita of psychology and linguistics at the University of Pennsylvania, is an internationally recognized expert on language acquisition.
“We really don’t have any hard evidence of the evolution of language,” Gleitman said during the Fred Kavli Keynote Address. “Language leaves no traces in the fossil record.”

In her remarks, Gleitman referenced scientific perspectives that frame language development either as an innate and uniquely human process or as a continuous and gradual response to the changing demands of human existence. Gleitman’s work leaves no doubt about her views on the longstanding debate regarding language development.

In contrast to scholars who ascribe to continuity theories portraying language as a process that evolved from prelinguistic systems used by our primate ancestors in response to the changing and increasingly complex needs of civilization, Gleitman and others believe language developed suddenly with “whatever genetic mutations were required” to bring modern humans into existence.

Gleitman said that to understand how language development is an innate form of communication that may be unique to humans, it is necessary to observe children using language and developing their skills. She is one of many scientists who view kids as key targets to explore the view that language development is a generally innate characteristic possessed by humans.

“We ought to be looking at young children,” she said while describing findings from research based on this approach. The studies, which Gleitman conducted with Heidi Feldman (Stanford University), APS President Susan Goldin-Meadow (The University of Chicago), and APS Fellow Ann Senghas (Barnard College), focused on children who were born without the ability to hear. In many cases, they had not yet learned sign language.

The deaf children that Gleitman and her collaborators observed were, as she describes, “free of inputs” related to language and therefore ideal targets for an investigation into how language develops.

During her address, Gleitman showed black-and-white video clips of young American deaf children from 40 years ago as they interacted with their hearing parents and the experimenters. She described elements of the interactions that showed children’s use of sentences with subjects and predicates, thus providing evidence of that grammatical structure that many theorists view as a core principle of language.

Some video clips showed scenes of interactions between deaf children in Nicaragua at a school attempting to teach them Spanish. The children, who were the focus of Senghas’s studies, often conducted in collaboration with APS William James
Fellow Elissa Newport and linguist Ted Supalla (both of Georgetown University), had no exposure to language prior to enrolling in the school established by the Nicaraguan government during the 1970s. The school therefore served as an ideal environment to study language emergence; it was there that the children spontaneously created Nicaraguan Sign Language (NSL) and used it with other deaf children who subsequently entered the school.

The dynamics between students provided researchers an opportunity to explore to what extent language is innate and how external inputs foster language learning. According to Gleitman, the American and Nicaraguan deaf children provide support for the view that humans have an innate capacity to express language, which they either learn at an early age from parents or which they create when such parental or environmental input is unavailable.

In longitudinal studies of the American deaf children, who ranged from 1 to 5 years old, Feldman, Goldin-Meadow, and Gleitman directed attention to the communicative gestures that the children used to describe the structure and content of what they were expressing. Gleitman said findings from this research showed that the children were able to create language governed by grammatical rules. In fact, she said, their sign language use resembled that of similarly aged children gradually mastering language in a traditional linguistic setting. For example,
Gleitman noted that many of the American deaf children omitted the subject or another word from their sentences, serving as a parallel to a phenomenon found in young children learning spoken language.

“The children are programmed in some way to desire a language,” she said.
Gleitman also presented video clips showing interactions between older and newer students from the Nicaraguan school to show how language continues to grow over time and how its users develop a consensus about how it should be used. The evolution of NSL provides an example, Gleitman argued, of the natural quality of language and its rapid development within a relatively short time period.
“We are not talking about eons here, for language to evolve,” she concluded, “but only 30 or 40 years — a nanosecond in evolutionary time.”