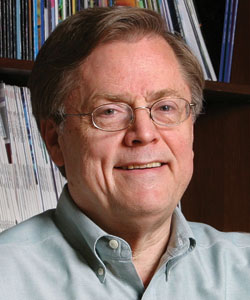 Bruce S. McEwen has spent more than 40 years studying how hormones regulate the brain and nervous system. His neuroendocrinology lab showed that stress hormones affect brain centers involved in learning and memory, emotion and mood control and has been at the forefront of research on the impact and mechanisms of stress effects on the brain. He has helped draw distinctions between good or adaptable forms of stress and toxic stress. McEwen has elucidated the ability of stress to alter the structure of the brain by showing how synapses and dendrites shrink in the hippocampus and prefrontal cortex or grow in the amygdala; his lab also rediscovered neurogenesis in the hippocampus and showed how it is affected by chronic stress. McEwen’s lab exemplifies an interdisciplinary approach; it combines behavioral analysis and measurements of hormone levels with neurochemical, morphological, neuropharmacological, cellular and molecular methodologies, and collaborative translational studies.

McEwen coined the term allostatic load, a concept that explains how stress systems that help the body survive can cause problems when overworked. This work has led to a realization that stress hormone effects are biphasic — protective in the short term and potentially damaging in the long term. And by focusing on sex hormones as regulators of structural plasticity in the adult brain, McEwen’s lab has raised awareness of the importance of studying gender differences in stress effects. Besides stressors that generate anxiety and learned helplessness, McEwen and his colleagues also investigate the neural and behavioral consequences of circadian disruption such as arises from shift work, jet lag, and sleep deprivation.

McEwen is the author or co-author of more than 900 scientific papers, and co-author of two books for the lay public. His is currently involved in the National Scientific Council on the Developing Child that investigates how early life stress can be ameliorated to minimize its lifelong consequences. McEwen’s research has contributed heavily to a new understanding of how the brain changes in structure and function during development and in adult life. His work has far-reaching implications for understanding the impact of stress on the brain and on human health in general.