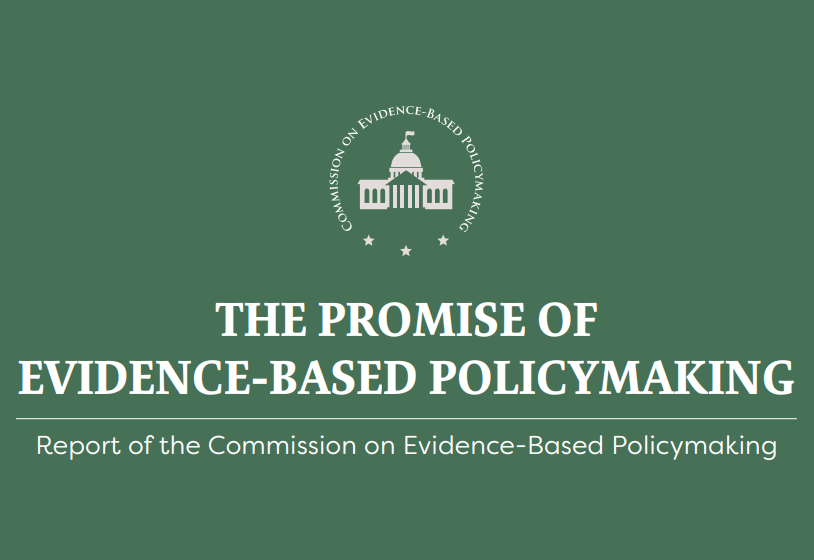 Efforts to bring scientific methods to bear on public policy have received a significant boost thanks to the work of a Congressionally-commissioned blue-ribbon panel of experts which has concluded that the US federal government should increase its use of scientific evidence to inform policymaking and administration. The Commission on Evidence-Based Policymaking has issued a report that points to significant new opportunities in research and leadership for psychological scientists with expertise in areas including judgment and decision making, analysis and research design, and data privacy and ethics issues.

In 2016, legislation cosponsored by Senator Patty Murray (D-WA) and Speaker of the House of Representatives Paul Ryan (R-WI) charged a commission of experts in behavioral science, public policy, statistics, and other fields to gather input from scientists, government leaders, other organizations, and members of the public to develop a set of recommendations on how evidence can be used to support decision making within the US government.

In its final report, “The Promise of Evidence-Based Policymaking,” the commission set forth a series of recommendations for the US government to study how to protect access to confidential data, enhance privacy protections in data collection, modernize the US data infrastructure, and strengthen the capacity to build evidence within the government. The report recommends the establishing of a Chief Evaluation Officer in each government department, for example, and urges that resources are made available to support evidence-building activities.

Psychological scientists interested in learning more about efforts to integrate evidence in government should attend sessions led by the Office of Evaluation Sciences (OES) and other federal groups at the 30th APS Annual Convention in San Francisco this May.

APS supports the recommendations of the commission, and urges the US government to call upon the assistance of psychological scientists in its efforts to strengthen its use of evidence in government.

“As field-leading experts in data collection, methodology, statistics, and evaluation, APS Members can play a central role in the scientific enterprise that will shape evidence-based policy decisions. Leading scientists in our field already are bringing behavioral research methods and perspectives to bear in evaluating and developing government policies and programs in a variety of areas,” said APS Executive Director Sarah Brookhart.

The Bipartisan Policy Center, a think tank which works to find common ground between different viewpoints, is carrying out the commission’s recommendations, which “offer the potential for the greatest improvements to evidence building about government programs in a generation,” according to Nick Hart, the director of the Center’s Evidence-Based Policymaking Initiative.

“The clear signaling from professional associations and non-governmental organizations, including APS, about the need for implementation of these recommendations will help us ensure the suggestions move from the paper they were printed on into reality, to vastly improve how we go about generating evidence about government programs and policies,” said Hart.

APS’s support for the recommendations of this commission is consistent with its broader backing of efforts to integrate science into government decision-making. APS helped lead efforts during the Obama administration in 2013 to encourage the use of behavioral science within the federal government. These efforts in part led to the founding of the White House Social and Behavioral Sciences Team, which today exists as the OES in the US General Services Administration.

Learn more about the Bipartisan Policy Center by clicking on this link.