Publications > Observer > Observations > A Seat at the Table 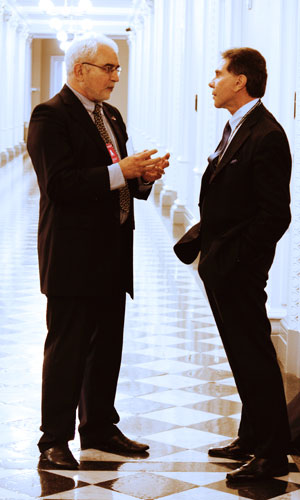 Historically, the US government has relied heavily on economists to help set policies on healthcare, commerce, consumer protection, education, law enforcement, and other domains where psychological and behavioral factors play a major role. But the federal government is creating a team that will give a broader set of behavioral scientists a seat at the table in policymaking.

Federal authorities want to assemble a team of experts in behavioral science and experimental design to work in various agencies testing interventions and policies that can help the government work better and save taxpayer dollars — and perhaps even help people achieve individual goals, ranging from losing weight to securing employment.

Philip Rubin, assistant director for social, behavioral and economic sciences in the White House Office of Science and Technology Policy (OSTP), says the administration is welcoming behavioral and social scientists into policy discussions even amid political tensions surrounding the government’s support for social science.

The team-building initiative follows a May 22 workshop that brought together psychological scientists, economists, and government leaders in Washington, DC, to discuss how to incorporate behavioral empiricism into policymaking. The event was sponsored by APS, OSTP, the National Institute on Aging, and the White House Council of Economic Advisers.

This new federal team, which will be overseen by the General Services Administration, is inspired in part by the Behavioural Insights Team (BIT) that British Prime Minister David Cameron commissioned in 2010 to test public policy interventions through randomized control trials (RCTs). Experimental psychologist David Halpern, who heads BIT, spoke at the workshop and said BIT’s research has demonstrated ways to increase tax compliance, home energy conservation, and charitable giving through social and behavioral inducements rather than stiffened laws and regulations.

The GSA hopes to recruit four or five researchers with experience designing, testing, and evaluating rigorous RCTs in fields such as social psychology, cognitive psychology, and behavioral economics. In addition, several federal agencies are looking to recruit academics to sit directly within their agencies to help inspire, design, and execute specific policy projects.

During the May event, participants acknowledged some of the challenges that economists and behavioral scientists face in working across disciplines to test and identify optimal policies.

“We don’t speak the same language,” said Weber, who studies decision-making in risky or uncertain situations. She noted that psychological science’s focus on effect significance differs from economic science’s concentration on effect sizes. Carstensen, founding director of the Stanford Center on Longevity, said that in discussions with economists, psychological scientists have to talk about effect sizes, efficiency, and the relevance of their findings in the real world.

University of Chicago behavioral economist Richard Thaler, co-author of the book Nudge: Improving Decisions About Health, Wealth, and Happiness, said academic psychology and journal publishers tend to value theoretical lab-based experiments over “real-world” studies. Kahneman agreed, and said that as a consequence, applied psychology is not attracting the best talent.

“Part of the problem is the nomenclature,” he said. “Psychology students are not attracted to something called ‘behavioral economics.’ ‘Applied behavioral science’ might be a better term.”

A full summary of the May workshop is available at the NIA website.

Publications > Observer > Observations > A Seat at the Table