Eating Habits Form in Early Childhood — Even in the Womb

They say a mother’s duty never ends, and according to Julie Mennella, Bring the Family Speaker at the APS Annual Convention, this ceaseless task list should include training a child to appreciate a healthy diet — a job that scientists now think begins well before birth.

“It’s very difficult to change dietary habits,” said Mennella, a researcher with the Monell Chemical Senses Center. “But if there is any hope … there probably is no bigger motivator to change than that which occurs during pregnancy and lactation and early motherhood.”

It’s no secret that many Americans embrace a diet that’s at odds with their own health. People today eat far more sugary and salty food than they do vegetables — particularly green vegetables, Mennella pointed out. Part of the reason for this trend, she argued, is that we’re naturally inclined to prefer sweetness to bitterness.

“Since the 19th century, the first thing a child has bought with their own money has been penny candies,” she said. “What children like is really a reflection of their basic biology.”

While sweetness is likely related to a child’s need to enjoy human milk, bitter tastes are a signal for something that’s poison, Mennella said. Observations of newborn faces confirm as much: sweet tastes produce facial relaxation; sour tastes produce a pucker; bitterness leads to mouths agape.

“As much as children like sweet, they dislike bitter,” she said. “Our biology is to be very sensitive to bitter, because this was our signal of all that was bad and toxic and distasteful.”

While this biology can’t be changed, children can learn over time to appreciate bitter-tasting foods, like green vegetables, that play a key role in good health.

“There are innate responses,” said Mennella, “but there’s inherent plasticity.”

What Mennella and her colleagues have discovered is that this plasticity can start during breastfeeding, or even in utero, if a mother eats healthy foods herself. The long-term effects of these early experiences are pretty consistent: The best predictor of how many fruits and vegetables a child eats at age 8, said Mennella, is how many he or she was eating at age 2.

In that sense, Mennella said, researchers now believe that what the mother eats during pregnancy or lactation becomes a “flavor bridge” for the tastes preferred by newborns and young children.

“Through scientific inquiry, biology sometimes reveals its fundamental principles,” she said. “For the baby to learn of the flavors, the mother has to eat the food.”

For a while it was believed that a mother’s milk had a consistent flavor, but Mennella knew from her work on animals that this wasn’t the case; rather, the taste of a mother’s milk changed based on what she ate. Sure enough, when such studies were tried in humans, the same results were found: Mothers who swallowed garlic capsules, for instance, produced milk samples with detectable tints of garlic. A similar test of amniotic fluid, which babies ingest in great quantities while in the womb, produced the same result. 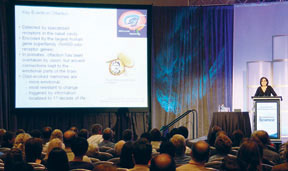 In one experiment, Mennella and her colleagues randomized pregnant women who intended on breast-feeding into three groups. One drank carrot juice during the last trimester of pregnancy. A second was exposed to carrots during lactation. A third group, the control, engaged in neither behavior.

The researchers then presented babies with a plain cereal, as well as one that was carrot-flavored. Sure enough, those who had been exposed to carrots in amniotic fluid or breast milk showed greater preference for the carrot cereal and made less negative faces while eating it.

“Not only could the infants detect these flavors, but it’s biasing the responses to these flavors when they’re first eating foods,” she said.

Exposing babies to healthy flavors is only the first step toward changing dietary behaviors. Several other lessons must be imparted to new mothers, said Mennella, if we as a society are to improve our eating habits. Crucially, it does no good for a mother to introduce her baby to carrot flavor if the child grows up in a household without any carrots. For that reason, before a mother can influence the diet of her child, she must first eat more healthy herself.

The myth of hiding healthy foods in flavorful ones to encourage healthy eating must also be debunked, Mennella said. Some parents hide broccoli in brownies, for instance, but while this increases a child’s fiber intake, it does nothing to help the child develop a taste for broccoli that can last over the long run.

“In order to learn to like a bitter tasting food,” Mennella said, “the baby has to learn to taste the bitter.”

Additionally, mothers need to understand that, in the realm of flavor, an infant’s facial expression lags behind its palate. A baby who has developed a taste for bitter vegetables may continue to make a face of disgust for some time, Mennella said. For that reason, a mother can mistakenly stop feeding these foods to an infant who has actually begun to like them.

Informing mothers of these findings is only one necessary step, Mennella said. The manufacturers of baby formulas should pay attention as well.

“In childhood we learn our rules of cuisine — when to eat, how to eat, what to eat,” Mennella concluded. “Anyone who makes a product for a child, it’s not just a source of calories, it gives information about who we are as a people.”

Of course, this being a family event, Mennella appealed to everyone’s inner child by distributing jelly beans to demonstrate the difference between taste and smell. Although we often describe food by taste alone, odor and irritation also contribute greatly to what we know as flavor, Mennella explained.

To sense taste by itself, she asked those in the audience to hold their noses while chewing the jellybean, then to release the plug and recognize the significant role played by odor. She then quoted the famous gastronome Jean Anthelme Brillat-Savarin: “Smell and taste are in fact but a single sense, whose laboratory is the mouth and whose chimney is the nose.” 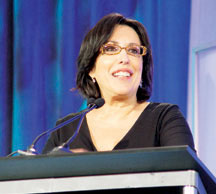