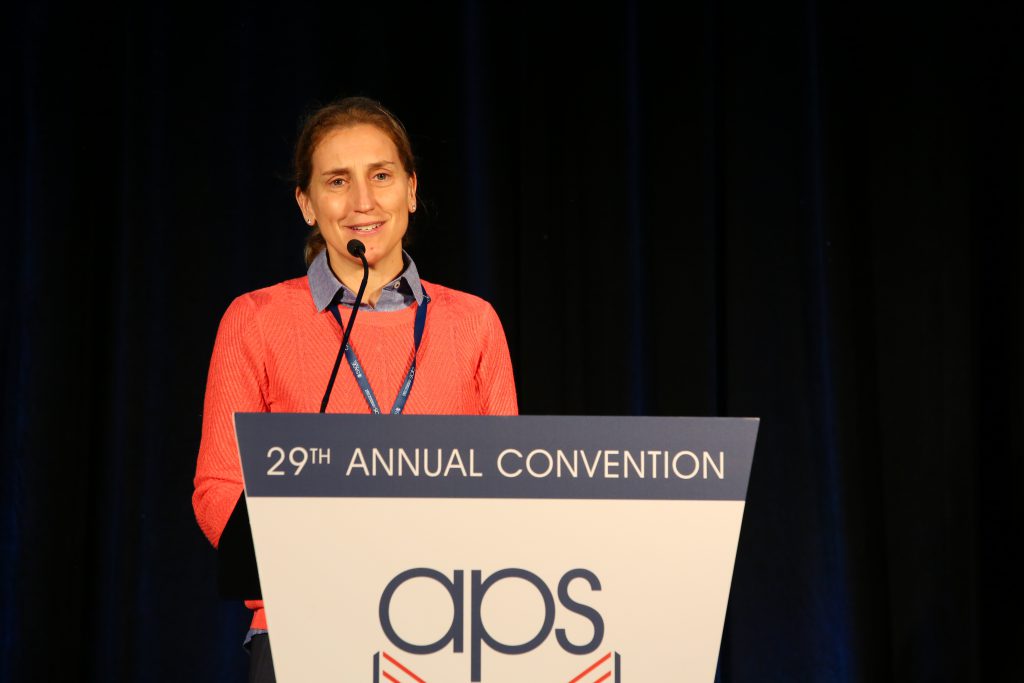 Michelle “Mikki” R. Hebl has won so many teaching honors as a professor at Rice University that she was awarded the George R. Brown Certificate of Highest Merit — a prize that retires her from teaching awards at Rice. Many of her greatest insights on teaching have come not from colleagues, lectures, or books, but from the students themselves.

Hebl dedicated her APS–David Myers Distinguished Lecture on the Science and Craft of Teaching Psychological Science, delivered at the 2017 APS Annual Convention in Boston, to the insights that she has gleaned from walking — and sometimes running — with nine of her former students.

“In sharing these stories, I hope to give you a sense of my teaching philosophy and what I think is critically important in the profession of teaching,” Hebl said.

Even Cow Patties Have Potential

During Hebl’s second year at Rice, she co-taught an interdisciplinary freshman class on persuasion. At the end of the semester, students had to present a final project. Not everyone took the assignment seriously, including one group of bathroom humor enthusiasts who called themselves The Cow Patties. But there were also great projects, including a pitch for US Senator Dianne Feinstein to run as the first female president from a student named Emily.

“I looked at this woman and I thought, ‘You are going to be really good. I need to invite her into the lab,’” Hebl said.

But at the scheduled meeting time, one of the girls from the Cow Patties showed up: Hebl had accidentally offered the lab position to the wrong Emily.

She couldn’t take the offer back, so Hebl invited Emily of the Cow Patties to become a member of the lab. Emily turned out to be an exceptional student, publishing journal articles as an undergraduate and eventually going to Stanford University for graduate school. Now, Emily Zitek is a tenure-track professor at Cornell University. And Hebl cites Emily as one of her favorite students.

“It is possible that Emily from the Cow Patties would have succeeded anyway, but I do want to instill upon you two important lessons: The first is that you have the power to change lives as a teacher — you have the power to shape people’s lives in insane ways. You can crush people and you can also build them up with simple actions. The second lesson I learned from Emily: Even Cow Patties have potential.”

Larry Martinez is on his way to becoming a tenured professor at Portland State University, but as a graduate student he was a bit of a challenge.

“He maybe took some years off of my life,” Hebl said with a laugh. “He is the only graduate student whom I went berserk toward, twice.” Hebl acknowledged that it probably didn’t help that Martinez entered the same year that Hebl decided to accept three other first-year students.

During his fourth year as Hebl’s student, Martinez threatened to drop out of grad school to become a kickboxing instructor — until Hebl sat down with him for a serious “come to Jesus” talk about finishing his PhD. “After I was done yelling, he just patiently and calmly looked up at me and said, ‘You’re right, that’s fair.’”

To Hebl, mentoring students is a lot like raising teenagers: the angst, the growth, the self-discovery, and a lot of love and patience. “When Larry graduated, I think he knew he owed me something big time. And he delivered! His sister went to the same church as [former Green Bay Packers quarterback] Brett Favre, and upon his graduation he handed me a signed football from Brett,” said Hebl, who hails from the NFL team’s home state of Wisconsin. “So clearly, ‘Come to Jesus’ talks can be wildly effective.”

You Don’t Always Know Which Students You Influence

During Hebl’s first class of her first semester teaching at Rice, a student with a smirk immediately raised his hand to point out that she had misquoted something to the whole class. He was such a smart guy that he had read the book and recalled a relatively minor detail, but one that Hebl got wrong all the same. The young man was named Chuck Baker, and he had a smile that could double as a smirk. He brought this smirk to all of Hebl’s classes, sometimes whispering to his friends during class. “I really thought he hated my class and my teaching, and he made me a little nervous,” Hebl said. “In the next semester, he showed up again. Same smirk. Same look of ‘I’m gonna correct you if you get it wrong.’ The third semester, he was in another class. And I asked him, ‘Why do you keep taking my classes, Chuck?’ He responded that I was one of his favorite professors at Rice. And my heart melted. I had really misjudged Chuck Baker.” When he graduated, Hebl met his entire family, including his 90-year-old grandmother. She also kept in touch with him and got to follow his life through investment banking and lobbying in Washington, D.C.

There Is Real Bigotry in Low Expectations

“For not having vision, Katie had more vision than all of her classmates,” Hebl said. She scored the highest, she took graduate-level courses and aced them, and she went on to work in the lab of APS Fellow Jack Dovidio at Yale University. Now she is a postdoc.

Juan Madera overcame an entirely different kind of adversity. He graduated from California State University, Dominguez Hills, before applying to the graduate program at Rice. Some faculty didn’t think that, even with his 3.9 GPA, he would be able to compete with students from more prestigious schools. But Hebl saw potential.

Initially, Madera struggled a little with statistics and the completion of his thesis. However, now he is an expert statistician, an outstanding researcher, and an award-winning tenured professor teaching at the University of Houston.

“There is simply bigotry in low expectations,” she continued. “Juan has mentored 46 students of his own, many of whom are diverse. I am inspired to help the rippling effects of nurturing diversity.”
Sometimes Students Deserve the Medal!

Hebl has run a marathon in every state, many of them with students. One of these students was an undergraduate senior named Kerry Loughran. Loughran had never run a marathon before, and she was a pretty slow runner. For a marathon to count as part of your official marathon record, you must finish the race in under 6 hours.

After Hebl and Loughran ran approximately 5 hours and 20 minutes together, Loughran was at the point of exhaustion. Hebl encouraged her to push on, but around the 21- or 22-mile mark, she momentarily passed out. After Hebl sat with Loughran for a while and ensured that she got the medical attention she needed, Loughran boarded a bus to take her to the finish line. Hebl had just enough time to finish the rest of the race.

When Hebl found Loughran after the race, Loughran was wearing a completion medal and had an even better marathon time than Hebl. She explained that she was determined to finish the race; when she got near the finish line, she hopped off the wagon to lurch across the finish line.
“What I want to say is, sometimes the students deserve the medal, darnit!” Hebl said.

Gina Ingersoll, a research assistant in Hebl’s lab for 3 years, intended to get a PhD in clinical psychology. About 5 years after she graduated from Rice, Ingersoll committed suicide.
“She was 28 years old, the same age that I was when I started at Rice,” Hebl said. “I wished that I had followed up on her; I wished that I had asked her if I could write her a letter or asked her if she was going back to school. I wished that I could have helped her with the pain that she had apparently experienced. I think about Gina still. She’s a student I won’t forget until the very end of my life.”

This experience reminded Hebl that students are dealing with their own issues and that what professors see is usually just the surface. But students — even students who appear to be excelling — have many layers. “Students have immense vulnerabilities, and we often forget that,” Hebl said.

The Privilege of Sharing a Mile or a Marathon

Your students can become some of your best friends, in life and in the field. “Eden King and Jenessa Shapiro are two of my very closest friends,” Hebl said.

In addition to running marathons with Hebl, King, an APS Fellow, and Shapiro have gone from being students to becoming some of Hebl’s best collaborators and colleagues. King was just “poached” from George Mason to come work with Hebl at Rice, and Shapiro is a professor of management at the University of California, Los Angeles.

“The privilege of sharing a mile with a student is the best gift that the field gives to me, and I think probably to you as well — although it may not be a mile; it may be another metaphor,” Hebl concluded.

“And what we get sometimes is the privilege of sharing a lifetime marathon.”