Observer > 2010 > July/August > Understanding the Interactions Between Emotion and Cognition

What is the relationship between feeling and thinking — that is, between emotional processes and cognitive processes? How does this relationship affect how we attend to the world and how we govern our impulses? Participants in the symposium “Emotion-Cognition Interactions: Implications for Attentional Processes and Self-Regulation” at the APS 22nd Annual Convention attempted to answer these questions.

Greg Hajcak (Stony Brook University) discussed his research involving event-related potentials (ERPs, brain-wave responses measured by electroencephalography) that occur in response to emotionally arousing versus neutral pictures. Like previous research, Hajcak found that emotionally arousing stimuli elicit a P300 ERP response (a wave deflection beginning around 300 ms after a stimulus), which has been shown in previous research to be elicited by salient or unexpected stimuli (“oddballs”) among irrelevant or to-be-ignored stimuli. The P300 is thought to reflect cognitive functions of attention and updating of context to reflect new and unexpected information, and Hajcak’s finding — that the P300 response is elicited by emotionally arousing pictures — indicates that emotional stimuli are automatically processed as targets of attention. Building on these initial findings, Hajcak presented work further demonstrating that the P300 response to emotional stimuli can be modulated by manipulating stimulus meaning and attention, and how this response is abnormal among individuals with various forms of psychopathology. 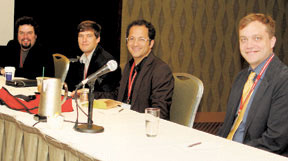 A common way of thinking about emotions is to fit them in a two-dimensional Valence-X-Arousal model. That is, emotions may be positive or negative, and they may be highly arousing or less arousing. The problem is that, using these two dimensions, it remains hard to further separate some emotions. For example, fear, anger, and disgust are all high-arousal negative emotions, yet they are obviously quite different in flavor. APS Fellow Eddie Harmon-Jones (Texas A&M University) presented a framework that adds a third dimension to this schema: motivational intensity — that is, the degree of motivation to approach or avoid a stimulus. Emotions that are high in motivational intensity are those that spur us toward a goal. Harmon-Jones and his colleagues have found that high-motivational-intensity emotions tend to narrow our focus of attention on a stimulus, promoting goal attainment — whether that goal is to gain a desired reward or to avoid a threat. On the other hand, emotions low in motivational intensity (such as sadness) tend to be after-the-fact responses to our success or failures in achieving our goals. The latter emotions promote reassessment, as well as openness to new opportunities in the future.

Michael Inzlicht (University of Toronto) and Brandon Schmeichel (Texas A&M University) shifted the focus from attentional processes to processes related to self-control. There is now an abundant literature supporting the idea that self-control behaves like a “limited resource” — people facing all kinds of self-control and executive function tasks perform worse when they have exerted their self-control muscles in a previous task.  Inzlicht presented research strongly suggesting that this effect is mediated by our emotions; specifically, the depletion of self-control may be a result of the dampening of negative emotion. Each of his experiments consisted of a depletion phase and then an emotion-elicitation phase, where he measured emotional responses with self-report, EEG, and measures of startle response. Results consistently suggest that exerting self-control causes people to feel less negative emotion, whether that be when they watch a frightening or sad movie, passively observe disturbing images, or receive negative feedback. The implication here is that exerting self-control can lead to depletion by a process that is akin to feeling less “pain” from the imagined consequences of giving in to temptation. For example, when we are presented with a tempting but fattening dessert, we may experience less pain from the imagined consequence of getting fat if our self-control has already been depleted in a previous task.

Schmeichel presented the opposite side of this coin — evidence that self-control depletion also temporarily increases the strength of our impulses and our perception of things that might be rewarding. In a series of experiments, Schmeichel and his colleagues found that exercising self-control increases approach motivation, and that it also facilitates the perception of stimuli that are reward-relevant (e.g., a dollar sign) and not those that are reward-irrelevant (e.g., a percent symbol).

Observer > 2010 > July/August > Understanding the Interactions Between Emotion and Cognition

thought provoking ,like to know more about self control