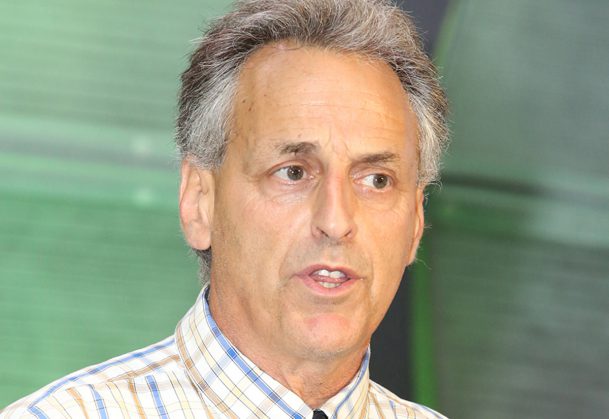 Psychological scientists rarely ascribe personality characteristics to brain regions. The hippocampus isn’t termed fickle, the prefrontal cortex isn’t characterized as conscientious, and the amygdala isn’t called two-faced or duplicitous. But in the case of the cerebellum, Richard B. Ivry of the University of California, Berkeley, makes a good argument for why we should call it stubborn.

Ivry’s research focuses on cognition and motor control, exploring how people select their actions, learn skills, and produce coordinated movements. His studies often utilize behavioral and neuroscientific measures including fMRI, transcranial magnetic stimulation (TMS), and computational modeling to study healthy people as well as individuals suffering from Parkinson’s disease, cerebellum degeneration, and cortical lesions. Through these studies, Ivry has been able to examine the contributions of specific brain regions to various learning mechanisms and to discern the functioning of different processes that operate outside human awareness.

In his William James Fellow Award Address at the 2016 APS Annual Convention in Chicago, Ivry focused on the “stubborn” nature of the cerebellum, highlighting behavioral studies that have illuminated unique properties of our sensorimotor system. Following the history of research from James and his student, Gertrude Stein, to the founder of Berkeley’s psychology department, George Stratton, Ivry connected the dots between simple behavioral outcomes and specific brain functions.

But after individuals learn a motor skill, they need to constantly adapt and calibrate the movements to match the context and current environment. Ivry referred to his sons and their adjustable basketball hoop to elaborate on the process: As the children grew, Ivry raised their hoop, and although they did not have to learn an entirely new skill to reach the higher hoop, they had to recognize the height difference (i.e., reenter the cognitive stage) and recalibrate their motor system to adapt to the situation (i.e., reenter the associative stage to determine how much force was needed to reach the higher hoop as well as return to the autonomous stage to practice the new movement until it was automatic).

Ivry used Stratton’s classic experiment with his inverted glasses from the early 1900s as a further example of motorvisual adaptation. Stratton is known for having worn an inverted monocle (he created glasses with lenses and mirrors that inverted both left and right and up and down, then modified them to a monocle because the device was too heavy to wear on both eyes) for 8 days to experimentally manipulate his sensory system in order to better understand perception and the brain’s adaptive abilities. The mythology on Stratton widely suggests that he successfully adapted his motor movements to the inverted vision over the course of a few days, but Ivry noted that specifics from Stratton’s logs indicated that whenever his hands or the object were not in vision, he had to return to the selection stage of motor skill development to appraise the situation before being able to make the correct movement.

“He did become quite coordinated in his movements, but only when his hands were fully in vision,” Ivry explained. A “dual representation” of the new adapted world he inhabited and his old sense of what is up, down, left, and right effectively were competing whenever his hands were not in sight, leading him into this “constant selection problem.”

This doesn’t mean Stratton’s experiment was a failure. Although he might not have been able to reach the autonomous stage, he certainly became quite proficient in moving about his upside-down world. And his work set the stage for many modern studies of sensorimotor learning.

“We are not nearly as radical as Stratton,” Ivry said. In fact, he believes that in a sense, current research “backtrack[s] from Stratton” by using simpler methodologies across shorter time frames.

Ivry and colleagues’ recent studies utilized a model task to study sensorimotor adaptation by having participants place their hand underneath a screen. The screen precludes their vision of their hand and displays a marker in its stead as well as a target. Participants are instructed to move their hand underneath the screen toward the target while the visual marker mimics their movement; then they return to the starting point to repeat the process. After the subjects become accustomed to the task, the researchers introduce a manipulation (or perturbation) to the visual feedback,
making the marker move on an altered course compared with the hand (e.g., a 20-degree rotation), similar to the inverted perturbation with Stratton’s glasses.

By keeping the task the same and rotating the marker’s degree of movement, the researchers are able to specifically target a rapid recalibration in the implicit execution system (i.e., the system close to the autonomous stage) rather than the selection or cognitive system, thus improving upon Stratton’s experiment. And overall, participants are able to rapidly adapt to the change in visual feedback, with the hand moving in a direction that nullifies the effect of the perturbation. Studies conducted on individuals with cerebellar degeneration or ataxia (the loss of control of bodily movements) have found that these individuals are not able to adapt to the task (i.e., they exhibit smaller changes in performance after the perturbation), meaning that this motor adaptation is dependent on the proper functioning of this particular brain region.

Ivry explained that recent computational models of this behavior are intriguing because the theoretical account flips traditional notions about the cerebellum: “Rather than actually putting an emphasis on the cerebellum in the motor domain, it puts it much more in the sensory domain, or at least at that intersection of sensory and movement.” These models, Ivry noted, derive from the theories dating back to the founding experimental psychologists who suggested that when people make a movement, the brain produces the movement as well as a copy of that motor action, a construct known as an efference copy. This copy is then used internally to predict how the movement should ideally occur and what the sensory feedback should ideally be. After the movement is executed, the actual feedback from the sensory system is then compared with the predicted feedback from the efference copy, and the difference between what was predicted and what happened is understood by the brain as the sensory prediction error.

For example, when people walk down the stairs, their efference copy leads them to predict that their foot should feel the next step. However, if the tread is missing and the expected pressure on the foot is absent, the brain processes this difference as a sensory prediction error, a signal that can be used to trigger a rapid correction to the movement to prevent the person from toppling over. In addition to facilitating online control, sensory prediction errors are also essential for learning. The errors are used to modify subsequent movements as well as to modify the sensory predictions generated from the efference copy associated with these movements.  In this way, the cerebellum keeps the sensorimotor system exquisitely calibrated, which is essential for the production of skilled movements.

In recent studies, researchers have shown how the gradual learning process characteristic of sensorimotor adaptation can be bypassed. By adopting an aiming strategy (i.e., selection stage again), people can learn to respond to a perturbation as large as a 45-degree visual rotation in a single trial. Yet one of the most striking findings from this task was that the more trials participants performed, the worse they got. Indeed, after roughly 80 to 100 trials, the participants’ movements missed the target by approximately 25 degrees.

“This is a fascinating phenomenon,” Ivry noted. “There are not many examples in human behavior where the more you practice, the worse you get.”

This deterioration in performance with practice, Ivry explained, reveals a unique quality of the cerebellum: It demonstrates that the cerebellum is unaware of the strategy (i.e., it does not “know” that the participant is purposely aiming away from the target to compensate for the perturbation). Instead, it uses the sensory prediction error, the mismatch between where the person is aiming and where the feedback appears, to “retune” the sensorimotor system. This process, coupled with the obliviousness of the desired goal, makes the cerebellum very “stubborn,” Ivry said.

Eventually, participants change their behavior, adjusting their movements to reduce their errors, finally reaching an “asymptotic stable state” in which their movements almost always come close to the target. Ivry explained this unique pattern in performance as a competitive interplay, or “tug-of-war,” between the feedback from the sensory prediction error and from the goal-directed task. The goal feedback is simple: Did the marker reach the target? If not, adjust the aiming strategy to a new angle to hit the target. The sensory prediction error, however, persists, since the marker is not appearing at a location corresponding to the anticipated position of the hand. This subconsciously drives the individual to pull the hand movement further away, in the opposite direction of the perturbation, even though this effectively worsens performance.

Further studies of this phenomenon on individuals with cerebellar degeneration or ataxia have shown a reduced contribution from the implicit learning process, indicating that the tendency of the sensory prediction error to worsen performance is truly dependent on the cerebellum. In other studies, individuals with damage to the prefrontal cortex — the brain region that would be most responsible for maintaining the goal-directed strategy — exhibited an exaggerated response to the sensory prediction error, producing even larger errors than those made by control participants. Ivry and colleagues posited that their performance was due to an “unchecked cerebellar system” whereby the sensory prediction error drove them to reach farther away. This drive prevented them from maintaining the strategy even though they recalled the instructions to compensate for the degree rotation and hit the target.

Trying to Fix the Impossible

Ivry and colleagues recently have devised a new experimental task to further probe the stubbornness of the cerebellum.  The setup is similar to that used in the visuomotor rotation tasks, but now the visual feedback is independent of the hand movement. Rather, in tandem with each reach, a marker follows a predetermined path; for example, it might be displaced 7.5 degrees away from the target. Even though this manipulation is described to the participants and they are told to ignore the marker, their behavior looks very similar to that observed in the adaptation studies. That is, the cerebellum responds to the the difference between the target location and the marker: By the end of 100 trials, participants were veering unknowingly from the target by approximately 20 degrees. Yet again, the cerebellum was found to be “insensitive” to the instructions, essentially “enslaved” to attempt to correct for the sensory prediction error.

Ivry explained that this new model and line of research have profound implications about how the cerebellum functions: The “cerebellum … doesn’t need to worry about goals or task success… [It] just simply assumes, ‘Anything I’m told to do, I want to do it or execute it as faithfully as I can.”’ 