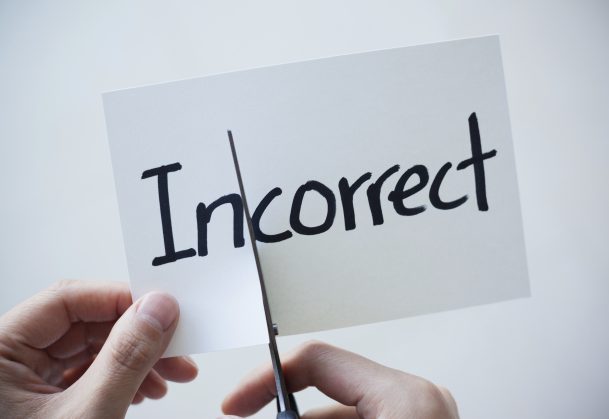 Conservatives, Liberals, and the Distrust of Science

By Cindi May and Gil Einstein

Whether you are reading your Twitter feed, a best-selling novel, or a newspaper, you are at risk: Historical and informational errors in our reading materials are more common than you might think. And if you read such errors, you are likely to report them as fact at some point in the future.

This repetition of misinformation occurs because people often encode and remember material they read without engaging in careful analysis or evaluation, and thus incorporate that information into their general knowledge (Andrews & Rapp, 2014; Singer, 2013). The fact that we remember, rely on, and repeat inaccurate information is well documented (e.g., Fazio, Barber, Rajaram, Ornstein, & Marsh, 2013; Jacovina, Hinze, & Rapp, 2014; Marsh, Meade, & Roediger, 2003). It can occur even for information that we know is wrong (Rapp & Braasch, 2014).

In many respects this tendency is a little troubling, as misinformation may influence our judgment and decision-making — perhaps even affecting such important choices as our vote in a presidential election. APS Fellow David N. Rapp (2016) offers important insights into why we make these mistakes and outlines interventions that have — and have not — worked to reduce our reliance on inaccurate information that we have read.

To give students a sense of the pervasiveness of the issue, first ask them to discuss in small groups instances in which they fell prey to inaccurate information, perhaps retweeting or sharing the “news” on social media. Then ask them, while working in those groups, to judge which of the following pieces of information are fact or fiction:

The first two and last two items are true. The remaining items are all examples of misinformation that went viral through social media, and students may thus be likely to report them as true despite their falsity.

Relaying misinformation is obviously embarrassing. In some cases, it can damage our personal or professional lives. Ask students to suggest ways to protect against falsehoods we encounter when we read. The following techniques are likely to be suggested, but research demonstrates that none of them are effective:

Why do these errors persist? Rapp argues that the human mind is designed for efficiency so that people are quick to perceive, recognize, respond to, and remember stimuli. For example, we tend to rely on recent memories because they are easily accessed (Benjamin, Bjork, & Schwartz, 1998), and we tend not to tag the reliability or quality of sources when reading because that requires time and effort (Sparks & Rapp, 2011). Both of these tendencies improve efficiency, and although that efficiency generally makes us more effective processors when information is accurate, it does leave us vulnerable to misinformation.

How can we mitigate these errors? Rapp and colleagues note that highly implausible errors are less likely to be adopted as true (Hinze, Slaten, Horton, Jenkins, & Rapp, 2014). Furthermore, if misinformation comes from a source known to be consistently unreliable, people are less likely to use it (Andrews & Rapp, 2014). Beyond these observations, Rapp and colleagues have developed two techniques for reducing reliance on misinformation, each informed by an understanding of the way cognitive processing works. See if your students can use what they know about human memory as well as Rapp’s theory about the source of these errors to generate these effective strategies:

This research offers two interesting “step back” lessons. First, human behavior is not intuitive; we need science to understand, predict, and control it. Many of the “obvious” solutions for combatting false information (e.g., warning people that material contains misinformation) do not work. Second, the identification of effective solutions not only is important for reducing the perpetuation of misinformation but also advances our understanding of how the mind works.

Conservatives, Liberals, and the Distrust of Science

On many issues, a gulf exists between what the public believes and what scientists have concluded. Is it safe to eat genetically modified (GM) foods? Yes, say 37% of US adults and 88% of 3,447 American Association for the Advancement of Science (AAAS) members (both surveyed by the Pew Research Center; Funk & Rainie, 2015).

The public-opinion-versus-science divergence continues: Have humans evolved over time? Are childhood vaccines such as the measles, mumps, and rubella (MMR) vaccine safe? Is it safe to eat food grown with pesticides? (Yes, yes, and yes, say most scientists, but no, no, and no, says much of the public.)

What gives? What drives the widespread rejection of scientific findings?

In some instances, note Stephan Lewandowsky and Klaus Oberauer (2016), the public is simply misinformed. A fraudulent but widely publicized report of a link between the MMR vaccine and autism led to a drop in MMR vaccinations and an increase in measles and mumps (Poland & Jacobson, 2011). People may doubt climate change based on the weather they are currently experiencing plus a lack of education about greenhouse gases, rising global temperatures, retreating glaciers, increasing extreme weather, and rising seas — albeit all with imperceptible gradualness. (Some misinformation, Lewandowsky and Oberauer remind us, is funded by corporate interests, as when the tobacco industry worked to counter smoking research.)

In many other instances, contend Lewandowsky and Oberauer, “scientific findings are rejected … because the science is in conflict with people’s worldviews, or political or religious opinions” (p. 217). A libertarian who prizes the unregulated free market will be motivated to discount evidence that government regulations serve the common good — that gun control saves lives, that livable minimum wages and social security support human flourishing, that future generations need climate-protecting regulations. A liberal may be similarly motivated to discount science pertaining to the toxicity of teen pornography exposure, the benefits of marriage versus personal freedom, or the
innovations incentivized by the free market. Partisans on both sides may, thanks to the ever-present confirmation bias, selectively attend to data and voices that confirm their preexisting views.

Voices from the right and left both may dismiss scientific expertise, but on different issues:

To explore this association of political views with acceptance of scientific conclusions, instructors can (a) mine survey data and (b) conduct a simple class experiment.

The National Opinion Research Center at the University of Chicago makes data from its periodic General Social Survey of adult Americans easily available. Visit this site and note that a click on the “search” box at the top will enable you or your students to search for variables of interest (as I did by entering the words “climate,” “gun,” “nuclear,” and “genetically modified”). Then, as a class demonstration or out-of-class exercise, you can investigate the following:

Lewandowsky and Oberauer also report on an experiment by Dan M. Kahan, APS Fellow Ellen M. Peters, Erica C. Dawson, and APS Fellow Paul Slovic (2013) that lends itself to a class replication. Show half the students the data on the left side of Figure 1 (see next page), from a hypothetical study of the outcomes in various cities of banning or not banning concealed handguns.

Ask each student: What result does the study support? Compared with cities without handgun bans, did cities that enacted a concealed handgun ban fare (a) better or (b) worse?

Then ask students whether they would describe themselves as tending to be generally more conservative or liberal.

Note that in the data on the left, the ban yielded a 3-to-1 increase versus decrease in crime, compared with a 5-to-1 increase without the ban (thus the ban was effective). Shown these data, most liberals recognized the result … but failed to draw the parallel conclusion (e.g., that the ban was ineffective) if shown the mirror-image data on the right. Conservative interpretations were reversed. Are your students’, too?

Given that people’s personal biases filter the science they
accept, how can we increase critical thinking, science literacy, and acceptance of evidence? In the case of climate change, we might

Distrust of science runs high among some who are religiously conservative (Pew, 2007). To increase enthusiasm for science among such students, I remind students of religion’s support for the founding of science, which was rooted in a spirit of humility that recognizes human fallibility. In that spirit, I suggest, let us welcome whatever insights science has to offer. As St. Paul advised, “Test everything; hold fast to what is good.” 

Trump, D. J. [realDonaldTrump]. (2014, Jan. 28). Snowing in Texas and Louisiana, record setting freezing temperatures throughout the country and beyond. Global warming is an expensive hoax! [Tweet]. Retrieved from https://twitter.com/realDonaldTrump/status/428414113463955457

Cindi May is a professor of psychology at the College of Charleston. Her research explores ways to enhance memory and cognitive functioning for older adults and individuals with intellectual disabilities. She can be contacted at mayc@cofc.edu.

Gil Einstein is the William R. Kenan, Jr., Professor of Psychology at Furman University. His research examines processes involved in prospective memory retrieval and how these are affected by aging. In 2014, he received the APS Mentor Award. Einstein can be contacted at gil.einstein@furman.edu.

Scientists from across the globe shared their successes and hurdles in promoting a science-focused model for training clinical researchers and practitioners. More