Aimed at integrating cutting-edge psychological science into the classroom, “Teaching Current Directions in Psychological Science” offers advice and how-to guidance about teaching a particular area of research or topic in psychological science that has been the focus of an article in the APS journal Current Directions in Psychological Science. Current Directions is a peer-reviewed bimonthly journal featuring reviews by leading experts covering all of scientific psychology and its applications, and allowing readers to stay apprised of important developments across subfields beyond their areas of expertise. Its articles are written to be accessible to nonexperts, making them ideally suited for use in the classroom.

Visit David G. Myers and C. Nathan DeWall’s new blog “Talk Psych.” Similar to that of the APS Observer column, the mission of their blog is to provide daily updates on psychological science.

The Story of My Life and Yours: Stability and Change

Criminals with psychopathy confuse and captivate psychologists and the general public. They alternate between acting charming and violent, caring and callous, well intentioned and impulsive. They also gnaw at our attention. Like moths to a flame, we gobble up true crime reports of serial killers, binge watch television shows that dramatize psychopathic daily life, and ruminate about whether crabby people in our midst border on pathological. We can’t get enough of people whose minds seem to be broken badly.

But, according to APS Fellow Devon L. Polaschek (2014), we might have the wrong idea about psychopathic criminals. Our main mistake is presuming that psychopathic characteristics are frozen in time. Without the possibility of change, criminals with psychopathy seem immunized against interventions that reduce their violence and other unwanted behaviors. Worse yet, criminals with psychopathy may appear to use their cold-blooded qualities to wield power over unsuspecting therapists, lawyers, and correctional officers.

To bring this science into the classroom, instructors can define psychopathy as having two main factors: fearless dominance and self-centered impulsivity (Lilienfeld & Widows, 2005). Next, ask students to create a profile of what they think describes a prototypical criminal with psychopathy. How they record their profile is up to you. This is an open-ended activity, so try not to guide your students’ responses. Simply ask them to include as many details as possible in their profile. Assure them that their responses will be anonymous.

After 5 minutes, gather and share a sample of students’ responses. Encourage the class to discuss why common themes emerged. Did the majority of profiles list the prototype as male? As a serial killer? Did any profiles list behaviors that could serve a positive purpose, such as helping a company or country prosper? How much do these assumptions relate to media depictions of psychopathy? How much are these assumptions grounded in scientific facts?

The second activity is designed to show students how they might have false assumptions related to criminals with psychopathy. Using PowerPoint, project the following scenarios on a large screen:

Imagine you manage a fast-food restaurant. One day, you receive two applications and your boss tells you that you must hire only one of the applicants.

My name is James. I am 44 years old and have worked at several fast-food restaurants previously. Ten years ago, I was released from federal prison, having served 16 years for attempted murder. I am required to tell you that upon entering prison at age 18, I was diagnosed as a psychopath.

My name is Mark. I am 46 years old. I’ve worked at several jobs, including some fast-food restaurants. Ten years ago, I was released from federal prison. I served 17 years for attempted murder. I am required to tell you that upon entering prison at age 19, I was diagnosed with major depressive disorder.

Have students form pairs and ask them to spend 5 minutes discussing whom they would hire and why. Did most student groups choose to hire Mark? If so, might their hiring stem from the potentially false beliefs that Polaschek (2014) identifies?

The Story of My Life and Yours: Stability and Change

Researchers, after patiently following lives through time, have been struck by the stability of our human traits. Across decades, our temperaments, personalities, and intelligence endure. “As at age 7, so at 70,” says a Jewish proverb. 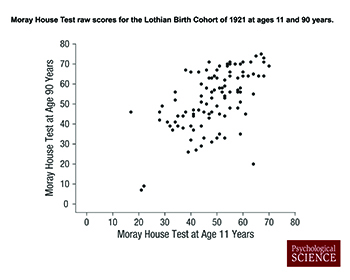 An extraordinary tribute to human stability was sparked when Patricia Whalley, with help from APS Fellow Ian J. Deary and his coworker Lawrence Whalley, located a data goldmine buried on dusty Edinburgh University basement storeroom shelves (Deary, Whalley, & Starr, 2009). The discovery: the long-forgotten results of intelligence tests administered on June 1, 1932, to 87,498 11-year-olds — almost every Scottish child born in 1921. “This will change our lives,” Deary aptly replied when Whalley told him the news.

Seizing this rare opportunity and combining it with their later discovery of data from a 1947 testing of almost all Scottish 11-year-olds — the only other known time when a nation has tested the intelligence of an entire age cohort in its population — Deary and his intrepid collaborators tracked down survivors and retested them at ages 70 to 90. Their consistent finding was that intelligence differences persist. Even without adjusting for the test’s imperfect reliability — children’s scores would vary some if they were retested the next day — the correlations across time have ranged from .67 (for those retested at age 70) to .54 (for those retested at age 90; see Fig.1).

The Scottish investigations — which make my short list of psychology’s greatest studies — also revealed that higher-IQ 11-year-olds lived longer, healthier lives with less risk of dementia. Among girls scoring in the highest 25%, 70% were alive at age 76 — as were only 45% of those scoring in the lowest 25% (Whalley & Deary, 2001). “Whether you live to collect your old-age pension depends in part on your IQ at age 11,” remarked Deary (2005).

Life is, in part, a story of stability, rooted in our enduring genes and brain. But as the variability in the Scottish Mental Surveys data indicates, it also is a story of change. That, too, is a lesson from the striking findings of Greg Walton (2014), Geoffrey Cohen, and APS James McKeen Cattell Fellow Carol Dweck — showing that minutes-long psychological interventions can boost school achievement. We are formed by our nature and our nurture.

In a modest naturalistic observation that followed lives across time, I, too, was struck both by stability and change. My procedure was simple:

The stability of their traits was stunning. Thoughtful, serious Bill was still making deeply felt pronouncements. Determined Annette continues to achieve. Enthusiastic Steve could still talk for 10 minutes while hardly catching a breath. Joker George still had an impish, edgy spirit. Happy Fiona still laughed and grinned. A half century had elapsed, and everyone seemed the same person … until I listened to what they said. Traits endured, but attitudes had changed. Some now were ardent progressives with a passion for gay rights; others expressed Tea-Partyish contempt for moral decay and big government. Until they spoke, I had no idea who was going take what stance.

As the remarkable Scottish intelligence studies demonstrate, our lives are marked by a stability that feeds our identity as well as by a potential for change that enables us to grow and to hope for a brighter future.

To support teaching colleagues who might wish to present the Scottish findings, Ian J. Deary has generously agreed to make available to teachers everywhere the slides he offers Edinburgh University introductory psychology students. These include photos of the storeroom discovery, photos of the participants then and now, and illustrations of the findings, such as the figure above. View or download the teaching slides.

C. Nathan DeWall is an associate professor of psychology at the University of Kentucky. His research interests include social acceptance and rejection, self-control, and aggression. DeWall can be contacted at nathan.dewall@uky.edu.
APS Fellow David G. Myers is a professor of psychology at Hope College. His scientific writing has appeared in three dozen academic periodicals, and he has published 17 books, including Psychology (10th ed.), Exploring Psychology (9th ed.), and Social Psychology (11th ed.). Myers can be contacted via his website at www.davidmyers.org.