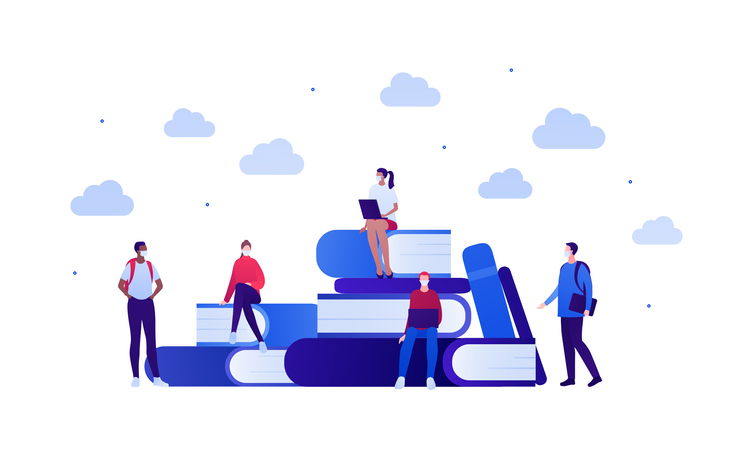 By the time I had to commit to applying to graduate school, the United States was 3 months into quarantine with no end in sight. The world was in a state of flux. With a global pandemic in full swing, tensions stirring around an upcoming election, and racial injustices taking center stage, I realized it was more important than ever to consider what was truly important in my life. I was and remain a (work-from-home) lab manager at Yale University conducting cognitive neuroscience research. I was worried about job security, my family’s health and safety, and how I was going to handle these stressors while applying to graduate school.

My fellow lab managers had already decided that they would apply in the next cycle, and I considered doing the same. I knew applying to graduate school would require time, effort, financial resources, and the support of my colleagues. Taking a step back, I had to ask myself if I had these resources and if I was in the right mental space to apply. I have since moved forward with the application process, but that doesn’t mean it is the right choice for everyone right now. I hope this article gives you a glimpse into some of the major changes and challenges I encountered during this application cycle so that you can come to your own best decision.

One of the major changes to applying to graduate school this year is that the GRE General Test can be taken at home. For me, taking the GRE at home had many benefits. For example, it allowed me to practice test taking where I would take the actual exam (i.e., at my desk in my bedroom). Having taken the exam both at home and at a testing center, I would say that not having to endure stressors like metal detectors and students reviewing the 30-60-90 triangle rule under their breath beside me was certainly a weight off my shoulders. I do suggest, however, that when your neighbor offers to watch your barking dog during your exam, you graciously accept.

When I began the process of sending my GRE scores to graduate schools, I had selected eight schools to apply to and was already aware, via #academictwitter, that some programs were no longer requiring the test. I was surprised, however, to discover that all eight of my schools had now followed suit. I had prepped for the GRE for 3 months before taking it in June. I was ecstatic about my scores and looked forward to using them to strengthen my application, but, after discussing the situation with my advisors, I decided against sending my scores. We felt that my application was competitive enough without them and that, unless I had a perfect score, they would hold little weight in a graduate school’s decision.

In deciding where to apply, I knew it was essential to talk to potential principal investigators (PIs) and graduate students to learn more about their research, the graduate programs, and future directions. Video calling made contacting and meeting with potential PIs significantly easier. Despite time changes and noisy backgrounds, being able to hop on a video call with students and faculty allowed me to learn so much more about the programs than I would have over email or on the phone. Over video, I could share my screen to explain upcoming presentations, discuss collaborations on upcoming grants and fellowships, and simply express myself in a manner that was more natural than the formalities of email. Using Zoom (or Skype) also gave me the opportunity to learn more about potential programs without having to be offered a post-application interview. As a Black and queer applicant, it was also important for me to learn about the steps universities were taking to address recently publicized racial injustices. Being able to talk to graduate students in the moment and ask these difficult questions gave me a better grasp of how these programs valued my background.

I mentioned before that the world was in flux; the routines we once held ourselves to have become distant memories. When applying to graduate school, I also had to consider the changes my advisors may have been experiencing. Did they have family to take care of, were funding cuts and layoffs affecting their work, and did they have time to advise me? When thinking of letter writers specifically, I chose not only people I knew well who could write strong letters of recommendation, but also people who I knew were reliable and had the time to assist me. I had to have explicit conversations with my letter writers about my goals in applying to graduate school. Again, I had to ask myself questions: Would they have the time to write strong letters of recommendation, were there ways I could help them submit their letters on time, could they edit drafts of my personal statements, and, if so, how long did they need to look them over? These questions are important no matter the global situation, and asking them can save a significant amount of stress for all involved.

Applying for funding is a necessity when applying to graduate schools during a pandemic. Normally, a university is able to provide internal funding for incoming graduate students for a set number of years, but because of the pandemic and the subsequent financial crisis, many acceptances now come with the caveat of requiring some form of external funding. When applying to external funding sources, I was advised not to dwell on any interrupted internships or research projects but, instead, to frame my statements around the goals I was able to accomplish in spite of my circumstances.

Before I received my work-from-home orders and our research center closed its doors for 4 months, I had proposed an independent study that would encompass everything I had learned throughout my time as a lab manager. Now I could not run my study, and I felt like my year and a half of research was all for nothing. Distraught, I reached out to my PI and explained my concerns. My PI, having been a graduate student during the Great Recession, said to me that one of the hardest parts of research is expecting change. Expect change, find alternatives, and shift the narrative. My PI then put me in contact with colleagues who had just completed data collection for a similar study, and while I waited for research to start up again at our lab, I began to assist on data analysis for their study. Performing this work shined a light on valuable implications and confounds that I would have faced with my own study. Now that I can turn back to it, I have the experience and network necessary to complete my work efficiently.

Student Notebook serves as a forum in which APS Student Caucus members communicate their ideas, suggestions, and experiences. Read other Student Notebook columns here, and learn about the benefits of Student Membership.

Interested in submitting a Student Notebook article of your own? Learn more and indicate your interest by clicking here (logged-in APS members only).

Jonathan Daniels is a lab manager at Yale University, studying how learning mechanisms allow us to make sense of our environment and how competing memories are represented in relation to one another in the brain. Daniels graduated with a Bachelor of Arts in psychology from Case Western Reserve University in 2019.

Student Notebook: How Sexual Boredom Turned Into a Good Thrill