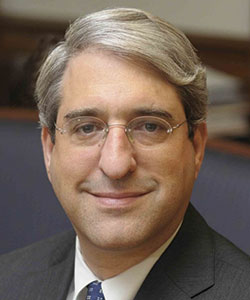 In an October 13 ceremony, APS Fellow Peter Salovey was inaugurated 23rd President of Yale University. Salovey also serves as the Chris Argyris Professor of Psychology at Yale and served as the provost of Yale from 2008 to 2013.

Salovey’s research focuses on emotions, particularly on links between emotion and health-related behavior. His “Emotional Intelligence” theory, developed in collaboration with APS Fellow John D. Mayer of the University of New Hampshire, posits that individuals have varying levels of emotional abilities, in much the same way that individuals have varying levels of intellectual abilities, and that these emotional abilities play an important role in human behavior.

As President of Yale, Salovey said in his Inaugural Address, he embraces challenges that include integrating technology and pedagogy, improving access to education for students from all backgrounds, and unifying the university community while fostering a global perspective and more global partnerships. He is also eager to foster further collaboration between Yale and the City of New Haven.