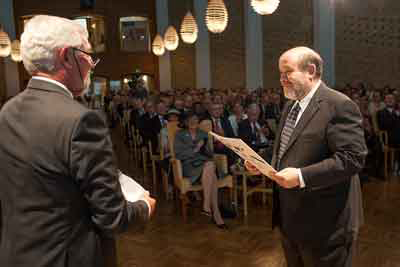 In 2012, APS Fellow and Charter Member David C. Rubin, Duke University, received an honorary degree from Aarhus University, Denmark, at a ceremony attended by Queen Margrethe II. Rubin has been connected to Aarhus University since 1985. He was a visiting professor for 2 years and has published over 20 articles with Aarhus faculty.

Rubin’s research focuses on human memory, cognition, and neuroscience, specifically long-term memory for real-world events and its neural basis. The focus on memory for complex real-world events calls for interdisciplinary collaboration, and Rubin has played a major role in developing autobiographical memory to the respected field of research it is today.

Collaboration with the Center on Autobiographical Memory Research (CON AMORE) and Aarhus University will move the field of research on autobiographical memory into new and exciting directions. “We’re now trying to move into this merging of memory and culture, and voluntary and involuntary, and how that interplays with clinical issues. There’s an amazing amount of that going on here,” says Rubin.

Watch David C. Rubin describe his research and his collaboration with Aarhus University.