Observer > 2012 > January > Researchers Say Drugs Can Boost Cognition, But Only So Much
Log in to Download PDF 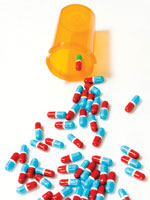 Cognition-enhancing drugs, once restricted to the world of science fiction, are now widely available and commonly used. The prevailing assumption is that, in terms of cognitive ability, more is better. But a study in the December 2011 issue of Current Directions in Psychological Science raises an important question: If more is better, then why haven’t humans evolved into super geniuses already?

The researchers propose that optimal levels of cognitive abilities are determined by trade-offs. Even traits that seem advantageous can’t increase indefinitely; eventually, they’ll level off.

Many studies of cognition-enhancing drugs have shown that drug treatment can help individuals with low baseline cognitive abilities, but performance can actually decrease among people who are predisposed to perform well. For example, controlling attention requires a specific amount of focus, not too much and not too little. Attention-enhancing drugs, such as amphetamines, can disrupt this balance.

Cognitive functions can also be interdependent, and increases in certain cognitive abilities can cause decreases in other, important domains. Savants with extraordinary working memory may be unable to detect trends or make generalizations. Similarly, if you drink a lot of coffee, your focus will probably improve, but you’ll also experience increased anxiety and a loss of fine motor control.

Cognition-enhancing drugs offer the promise of better mental performance — but research indicates that your unenhanced abilities, fine-tuned by evolutionary selection, may actually serve you better without a boost.

Observer > 2012 > January > Researchers Say Drugs Can Boost Cognition, But Only So Much