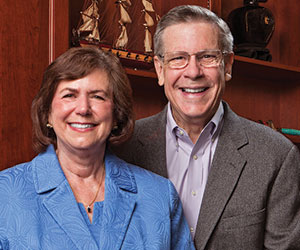 APS Fellow Ed Diener and his wife Carol Diener want you to imagine taking chapters from various introductory textbooks, then shuffling them in any order you want to best fit the course you are teaching — all within minutes on a computer. Oh, and the book is free to your students. Chapters can also be used as supplementary readings, free of charge.

This is precisely the model that the Dieners are proposing for psychology education.  Professors of psychology emeriti at the University of Illinois, the couple has founded the Diener Education Fund, a non-profit organization with the mission of re-inventing higher education to serve the changing needs of students and professors. Through that organization, they have created the Noba project, a free website that contains textbooks and related resources.

Ed Diener, founding editor of the APS journal Perspectives on Psychological Science and recipient of the association’s William James Lifetime Achievement Award, says one key advantage of Noba is the ease and speed with which online textbooks can be updated. But he adds that the site also is designed to make learning materials more affordable for students across the globe.“Our e-text is part of a movement to help educate more people at a lower cost, and we are hoping professors will join this movement,” he said. “Electronic books are also undoubtedly the wave of the future.”

In this month’s Academic Observer, Henry L. Roediger, III, talks to Ed and Carol Diener about the Noba project.

In his extensive research on happiness and subjective well-being, Ed Diener understands well the needs of the disadvantaged. His studies have included some of the world’s most impoverished people, including groups such as the homeless and those living in slums.

Carol Diener has a strong record of training undergraduate and graduate students, working with them to provide counseling, special education, data collection, and other services to community agencies that work with young people. A clinical psychologist and attorney, she directed UI’s Mental Health Worker program and created three community outreach programs.

The Noba project has given the Dieners the chance to to work with their son, Robert Biswas-Diener, one of three of their five children to follow their steps in psychology education. Biswas-Diener, who runs an Oregon-based consulting organization that provides coaching and training in applied positive psychology, serves as managing editor of the site.

The Diener Education Fund has supported the creation of several textbooks for Noba, but the organization is considering several ways to make the website self-sustaining — including the possible help of charitable foundations.

The site currently contains a variety of introductory textbooks on topics ranging from the biological basis of behavior to sensation and perception. Texts are written by psychological scientists rather than generalists, so that the materials are “much more likely to have the facts straight,” Diener says. At the same time, the editors try to insure that the materials are accessible to beginning students and not written in jargon. Additional textbooks and instructor resources are in development.

Noba will also feature multimedia learning aids. In fact, the Diener Fund has launched a new competition for the best student-produced educational YouTube presentations. The submissions can be no longer than 3 minutes in length, are due May 1, 2014, and can be submitted by individuals or teams at both the undergraduate and graduate levels. The focus of the first round of awards, to be announced in June, is on memory and learning, although the entrants can extend those concepts to other areas of psychology (e.g., clinical, social, neuroscience). Noba will award $6,000 for the top honor, $3,000 for second place, and $1,000 for third place. Details are available at nobaproject.com/student-video-award. The Dieners hope to stimulate more active learning exercises with future award programs for both students and faculty.

What a fabulous idea. I teach Psychology in the UK and fully support any online learning.