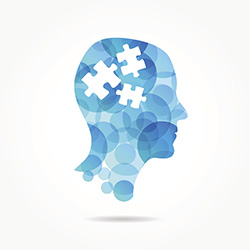 The adult brain is often used as a model for understanding both typical and atypical development, but in reality the brain is different in infancy and is constantly changing in response to both genetic and environmental influences. The importance of understanding the timeline and nature of these interactions on neural, cognitive, and behavioral developmental trajectories is the focus of a recent article published in the APS journal Clinical Psychological Science.

The authors, APS Board Member Annette Karmiloff-Smith, B. J. Casey, Esha Massand, Przemyslaw Tomalski, and Michael S. C. Thomas, describe research that has used multimethod approaches — such as behavioral, electrophysiological, computational, and nonhuman animal models — to investigate the effects of genetic and environmental factors on typical and atypical development.

One factor that has been found to influence developmental trajectories is socioeconomic status (SES). Research using electrophysiological techniques has shown that disparities in SES are associated with differences in neural structure and brain activity. These differences can be detected in the first few months of life, highlighting the difficulties SES disparities cause in later development and the importance of early intervention for disadvantaged children.

The benefit of using a developmental approach can also be seen in fear and anxiety research. Studies in both mouse models and humans have identified genetic factors and environmental influences (such as stress) that alter the brain’s neural structure and function, leading to changes in the way people respond to potentially fear-inducing stimuli.  Both environmental factors and genetic differences interact to influence whether individuals respond or not to treatment. These studies have also found that the period of adolescence seems to be associated with less successful fear extinction, providing indications as to how and when we might best treat people for anxiety disorders.

In some cases, typically and atypically developing individuals behave similarly, even when markedly different neural processes underlie each group’s behavior. Studies examining recognition memory have found different neural and cognitive patterns in people with and without autism spectrum disorder (ASD), despite similar behavioral scores.  This finding highlights the importance of understanding the mechanisms underlying behavior, rather than just focusing on the end behavior itself.

Neurodevelopmental approaches can also be used to explain complex facets of disorders, such as the skill regression that sometimes occurs in children with autism, and the diverse range of symptoms found in people with ASD. Neurocomputational models have recently been used to test the promising hypothesis that excessive reductions in synapses in childhood are responsible for the changes in behaviors and abilities seen in young children with ASD.

While focusing on different topics, these studies all demonstrate the importance of using a developmental approach when seeking to understand the mechanisms driving typical and atypical behavior.