In popular culture, neuroticism carries a light, humorous, even attractive connotation — witness the appeal of comedians like Woody Allen and Larry David or characters such as Liz Lemon on the TV show “30 Rock.” But from a clinical perspective, a negative temperament may play an underlying role in many mood and anxiety disorders. The more that psychological scientists appreciate neuroticism’s serious side, the better they can alleviate the health problems that accompany it.

David H. Barlow’s decades of work in the field — he is professor of psychology and psychiatry at Boston University and founder of the Center for Anxiety and Related Disorders — have placed him at the forefront of neuroticism past, present, and future. A brief history of neuroticism, and a briefer glimpse at new ways to fight it, framed his James McKeen Cattell Fellow Award Address at the 24th APS Annual Convention.

“Over the last 10 or 15 years we’ve discovered substantial overlap among the anxiety and mood disorders,” Barlow said. “We also have had some data over the past several years that higher-order dimensions [such as neuroticism] can account for a lot if not most of the covariance among these disorders.”

There certainly is a clearer understanding of neuroticism today than when it was first described by Hans Eysenck in the 1940s. Over time, other terms emerged to describe the core behavior, but neuroticism remains in wide use (along with behavioral inhibition and negative affect). The temperament is defined, in broad terms, as experiencing strong negative emotional reactions to stress.

In the 1980s, Barlow and colleagues organized a “triple-vulnerability” model of neuroticism. The theory includes a strong biological component as well as a generalized psychological component. The former refers to a degree of heritability; the latter to the disruptive early experiences that might predispose one to the temperament — a trauma or even a parenting style that creates a sense that the world is a difficult, often uncontrollable place. 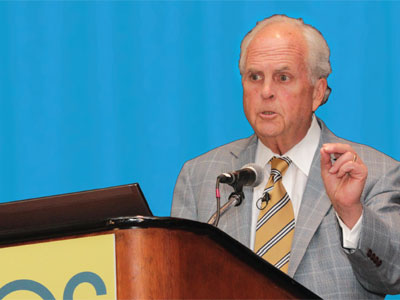 “We came to the notion that these two vulnerabilities, when they line up properly —that is, when someone’s unfortunate enough to have the two of them — and it becomes activated by stress, then they develop a kind of generalized anxiety syndrome,” Barlow said. “They become generally anxious. You might say neurotic.”

The third element of the triple-vulnerability model is a specific component, or a particular form the anxiety takes, such as obsessive-compulsiveness, or panic, or a certain phobia. While the data are weaker for this branch of the model, with conclusions based mostly on retrospective studies, the limited evidence suggests that this specific vulnerability comes from early experiences as well, Barlow said.

Today it is believed that two other factors play a key role in shaping the neurotic temperament. The first is that people predisposed to this behavior don’t handle intense emotions well. One study conducted a few years ago confirmed that patients in Barlow’s clinic found emotions less acceptable than well-matched participants outside the clinic and typically tried to suppress them.

The second is that neuroticism tends to be accompanied by a pervasive avoidance behavior of some nature. This might be situational avoidance (a social phobic avoiding a party, for instance), subtle behavioral avoidance (a general-anxiety patient using perfectionism to get control of the world), or cognitive avoidance (an anxious person watching television to distract from unpleasant thoughts).

In the early days of cognitive-behavior therapy, said Barlow, clinicians sometimes embraced avoidance techniques that would seem to work in the short term but proved, over the long haul, to make matters worse.

In the 1990s, Barlow and colleague Timothy Brown began a closer study of the role neuroticism played in the mood and anxiety disorders found in their patients. What they discovered was that negative affect contributed substantially to all the disorders in the clinic — in particular generalized anxiety disorder and depression. The findings have since been replicated many times, Barlow said.

Later they followed about 600 patients, most of whom were treated at the Center for Anxiety and Related Disorders, for 2 years. Some had major depressive disorder, others social anxiety disorder, still others generalized anxiety disorders, or GAD. The clinicians found that neuroticism seemed to account for all the changes in these disorders over time, Barlow said.

“In other words, once again, it seemed to be the major factor here,” he said. “It looked really like all of the action here was on the temperament, not only for GAD. but for some of the other disorders.”

As a result of this work, Barlow and Brown conceived a novel way of presenting a patient’s case. Rather than simply labeling patients with a major disorder, and perhaps some co-morbid disorders, the clinicians created a profile that documents four primary dimensions — temperament, mood, social anxiety, and avoidance — at the same time.

“We think maybe this might present a more complete picture of someone coming in with any of the emotional disorders,” said Barlow, “and so we’re moving forward with this in terms of profiling.”

They’re also moving forward with a trans-diagnostic treatment model called the “unified protocol.” The therapy addresses the temperamental roots of mood and anxiety disorders. After all, if neuroticism is at the core of the problem, then alleviating it should alleviate the larger disorder too.

While the approach is a significant break from the individual protocols of the past, early signs are encouraging. The unified protocol works to establish the kinds of emotional experiences that mood and anxiety patients find aversive, then helps a psychological process of extinction take hold. Results from an initial series of cases suggest that neuroticism is indeed malleable in the hands of Barlow and company and therefore susceptible to improvement.

“Developing treatments to distill common principles, to treat trans-diagnostic temperamental features, may bring us to the next level,” Barlow said. “Coming from someone who had a lot to do with a lot of these individual protocols that some of you use for panic disorder and other disorders, all I can say is: Time marches on. Ideas change — hopefully for the better.”

My adopted mother (primary caregiver) was a borderline personality, I have a family history of depression, I have reactive attachment disorder – avoidant (perhaps from the adoption process, perhaps from a pathological caregiver), and I developed Schizoid Personality Disorder (SPD). After isolating myself from my family (i.e. adopted mom and her enabling family) and self-medicating, she re-established contact when she was dying, and it went very badly. I still ruminate on it years later. Only recently have I realized that I too am neurotic, despite brave and deep attempts to get better. Luckily, I have a very high IQ, and a clear idea of my self-improvement path. Finally, (although you very likely don’t understand yet) I expect to live a long long time due to radical longevity treatments, so the stakes couldn’t be higher – neurosis (negative affect and dysfunctional handling of stress) is a clear and present danger to my longevity.

I write this as a form of therapy for me as I only just last night I discovered this label to my experience after a terrible week, and it gives me hope. I am not broken and falling apart by all the various ways of anxiety, depression, avoidance, disassociation, over emotional/sensitive, parrellel playing, over excited, fearful, paranoid, I am simply neurotic. I am however grateful and thankful for this attitude towards life. I am grateful for my parents I have been unfortunate enough to get because through sheer misery, self inflicted loneliness and isolation, sadness, a disbelief in my experience: ‘this can’t be it! This can’t be what life is like’, I Yearned for happiness. My will to be ‘normal’ and happy is what drove me through a two year ‘intellectual masterbation’ I googled and you tubed all kinds of healing modalities various diets that don’t overstimulate my senses (sugarless saltless unprocessed real food) to promote dreaming(I much preferred being asleep in dream world than in my waking life), food for good feelings, to wholistic excercise such as yoga, tai chi, Qi gong. As well as mental stimuli such as Carlos Castaneda, Bashar, Eckhart Tolle, Abraham hicks and so finally I find myself being lead to shamanism. An ancient art of being. And that’s just it. My cure is to constantly find my balance, constantly relax my body through breathe, constantly connect to the Great Spirit, by being present with whatever comes. Some days I fall off the razors edge but what a journey!

Im 15 years old and have just discovered that I have alot of the neurotic tendencies that are being described such as negitive reactions to everyday occurances and a obbessive approach when it comes to asignments (even while writing this I am re-reading what I’m writing). This whole situation is kind of daunting to say the least. But I hoping to find ways to help deal with such negitive emountions. Somy question is how do I develop methods to deal with such emountions?

My anxiety comes from ptsd and as a coping method I’ve always internalized my emotions. I began to struggle with nuerotic behavior after being in my first “grown up” relationship as a freshman in college. This ultimately resulted in me being ending an engagement. I’m not sure if this will make sense but to properly live you need to “get out of your own head”. Personally my advice would be to talk with someone which sounds clichè, be involved in a team, and don’t put limits on yourself. Trying to overcome this isn’t a simple process and you will have your struggles but god dammit it’s worth a shot.

This article was a blessing to indulge in since battling a somewhat unrequited relationship that has been strained for the last four months. Ive spent many hours talking with professionals and lost many hours of sleep trying to play sleuth in figuring out what exactly has been going on inside my spouse’s head. How neuroticism was overlooked is beyond my belief but all the aforementioned material above hits the mark on what I’ve been dealing with. Thank you!