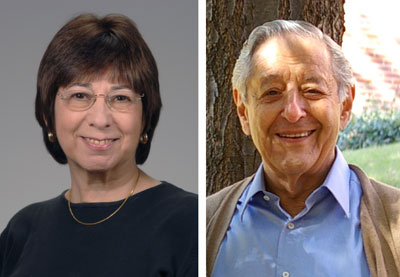 APS William James Fellow Award Recipients Leslie Ungerleider and Mortimer Mishkin have been awarded the 2012 Grawemeyer Award in Psychology. They were selected for the prize from more than 20 nominations, and they will receive $100,000 in recognition of their influential work.

The two National Institute of Mental Health (NIMH) researchers were honored for their pioneering work on visual processing in the brain. Ungerleider and Mishkin were the first to show that the brain uses separate visual processing systems to recognize what objects are and where they are located. In their 1982 paper published in Behavioural Brain Research, Ungerleider and Mishkin proposed that one pathway in the cerebral cortex, the ventral stream, processes information related to identifying objects, and another pathway, the dorsal stream, manages information concerning the location of objects. This two-streams hypothesis has influenced numerous studies across many fields of psychological science, including memory, cognition, and sensation and perception.

Ungerleider is currently chief of the Laboratory of Brain and Cognition at the NIMH. She is an NIH Distinguished Investigator and has been elected to the National Academy of Sciences. She was the 2001 recipient of the Women in Neuroscience’s Lifetime Achievement award and a 2010 recipient of the APS William James Fellow award.

Mishkin is chief of the cognitive neuroscience section of the Laboratory of Neuropsychology at NIMH. He has been recognized as an NIH Distinguished Investigator and was awarded the National Medal of Science by President Barack Obama in 2010. He received the  APS William James Fellow Award in 1989.