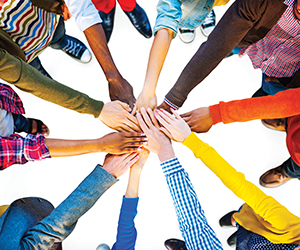 Despite increasing attention to issues of diversity in scientific research, participant populations in behavioral science tend to be relatively homogeneous. Understanding how people differ across various dimensions, and how those differences are driven by underlying psychological, biological, and social processes, is critical to building a rigorous and comprehensive clinical science.

A special series in the July 2016 issue of Clinical Psychological Science highlights the importance of broadening the traditional scope of clinical science research, and advancing the field so it can adequately address the needs and concerns of diverse populations.

“Despite commitments to diversity in the bylaws and ethics codes of our professional associations, as well as widespread calls for the development of basic cultural competencies in clinical practices, psychological scientists remain a largely homogeneous group and our science is similarly narrow in scope,” special series editor David H. Rosmarin (McLean Hospital at Harvard Medical School) notes in his introduction.

But the changing demographics and increasing heterogeneity of populations around the world suggest that researchers must do more to ensure that their science better mirrors reality.

“Unless we start to embrace the fact that not all human beings are alike, clinical science will become increasingly irrelevant to most of the population,” Rosmarin says.

Research already has revealed ethnic and cultural differences that cut across all domains of mental health, including incidence, prevalence, treatment, and prevention. Accumulated data show, for example, that individuals in different groups experience symptoms and disorders differently, have varying perceptions of mental health services, and have differential access to mental health care.

It is time to recognize, says Clinical Psychological Science Founding Editor and APS James McKeen Cattell Fellow Alan Kazdin (Yale University), that “ethnicity and culture are not add-ons but are fundamental to the core processes we study.”

This special series presents three research articles that investigate mental health issues in diverse contexts, using theory-driven, evidence-based approaches. The aim of the series, says Rosmarin, is to demonstrate what a sophisticated, rigorous diversity science has to offer, paving a way forward for researchers in clinical science.

Focusing on the role of family in the lives of African American youths, Tamika C. B. Zapolski and colleagues find that supportive parenting weakens the link between discrimination and later drug use by reducing symptoms of depression. These results suggest that support from parents may be critical to preventing drug use among African American teens, especially for those who have experienced discrimination.

Investigating Native Americans’ spiritual practices, Melissa Walls and colleagues find that spiritual involvement is associated with either positive or negative mental health outcomes, depending on individuals’ experiences of discrimination and historical loss. These findings suggest that the effects of culturally-based spiritual practices on Native Americans’ mental health are not linear but instead are moderated by environmental factors.

The three articles in the series investigate outcomes across racially and culturally diverse groups, but Rosmarin and Kazdin emphasize that diversity science encompasses many other characteristics and dimensions, including gender, sexual orientation, socioeconomic status, disability, family composition, and geographic location.

“Arguably, diversity includes all those domains by which we vary and that systematically influence the topics we study,” Kazdin writes in his introduction to the series. “One could not represent these in any single journal issue, set of articles, or perhaps even a single book. We have in the articles that follow a small set of research to make the issue of diversity salient, to convey that much more is needed, and that diversity is fundamental to what we study in many of the sciences (social, biological, etc.) and in this case, psychological science.”