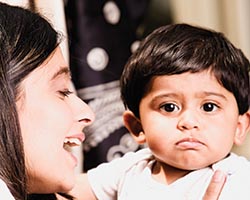 People tend to speak more slowly, use a sing-song voice, and use cutesy words like “tummy” when speaking to babies and small children. While we might be inclined to think that this kind of “baby talk” is easier for children to understand, new research suggests that mothers may actually speak less clearly to their infants than they do to adults.

In a truly collaborative effort, two research teams — one in Paris, France, and the other in Tokyo, Japan — recorded 22 Japanese mothers talking to their 18- to 24-month-old children and to an experimenter. A team of experts at the Laboratory for Language Development at the RIKEN Brain Science Institute in Tokyo then spent 5 years annotating the 14 hours of speech, marking specific aspects of the speech, including the beginnings and ends of consonants, vowels, and phrases.

Next, the researchers applied a technique they had developed to measure the acoustic similarity between any two syllables, like “pa” and “ba” or “po” and “bo.” Because the analysis is automated, the international team was able to examine the 118 most frequent syllable contrasts in both the adult- and child-directed speech patterns.

Going the Distance: Babies Reach Farther With Adults Around

Eight-month-old infants are much more likely to reach towards distant toys when an adult is present than when they are by themselves, according to research published in Psychological Science, a journal of the Association for