In Stanley Milgram’s famous obedience experiments, the subjects, called “teachers,” were instructed to shock the “learners” for every wrong answer. The learners, confederates in the study, were not actually shocked, of course, but the teachers believed they were—and they even heard faked cries of pain to add authenticity. Most of the subjects showed signs of distress, as one would expect, and some were extremely agitated. But it’s said that some of the subjects laughed when they heard the screams.

We call this nervous laughter—incongruous emotional displays like chuckling uncontrollably at a funeral or some other somber or upsetting event. Everyone has witnessed or experienced such discordant expressions, though we’re probably more familiar with incongruous negative displays—crying at a wedding, growling at the sight of a newborn baby, screaming in the presence of a teen idol.

Are these inappropriate emotional expressions simply embarrassing aberrations? What psychological purpose could they serve? Yale University psychological scientist Oriana Aragon and her colleagues have been studying this phenomenon in the laboratory, and they suspect that such displays—as uncomfortable as they can be—might actually play an important role in overall emotional regulation. That is, when we are at risk of being overwhelmed by our emotions—either positive or negative—expressing the opposite emotion can have a dampening effect and restore emotional balance.

The scientists based their reasoning on a widely accepted model of emotion. Think about someone winning a $1 million lottery prize. Normally, the winner mentally appraises such an event, and in this example, decides that winning the lottery is a very good thing. This appraisal leads to intense happiness and positive verbal expression: “Oh, my god. I can’t believe it!” Often, this is all there is to it, but in some cases, there is also an expression of sadness—a facial expression, tears—that does not seem to fit with the experience.

Aragon and her colleagues believe that people have emotional limits. When we sense that our escalating sadness or joy is reaching an unmanageable limit—that our bodies are about to be overwhelmed physiologically—this perception triggers an incongruous emotion to balance things out. At least that’s the theory, which the scientists have been exploring in their studies. 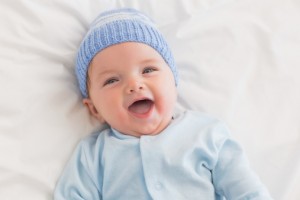 In one study, for example, they focused on cute babies. They morphed photographs of babies, so that some were more infantile than others—larger eyes, cheeks and foreheads, and smaller noses, lips and chins. Male and female volunteers, about 30 years old on average, reacted to the photos, and as expected, they were more positive about the more infantile babies. They were also more likely to report being overwhelmed by positive feelings when looking at the younger babies. Volunteers also described their feelings about the babies: I want to hold it! I want to protect it! I feel like pinching those cheeks! I want to eat it up! And so forth. The scientists wanted to get an overall measure of “playful aggression” in volunteers’ responses to cuteness.

The results confirmed the scientists’ expectations. Participants wanted to care for the infantile babies more than the older babies, and they also reported more aggressive expressions toward the younger babies. They also found, as hypothesized, that the function of the pinching and growling and other playful aggression is to regulate overwhelmingly positive feelings toward the babies—to help people cope with their intense emotions.

Although this study focused on cute babies, the scientists also found that individuals react with mixed emotions, or they don’t, regardless of the situation or the precise emotion. That is, the people who want to pinch babies’ cheeks also tend to cry when reuniting with a loved one.

The scientists conducted several studies of incongruous emotions, described in a forthcoming issue of the journal Psychological Science, all supporting the general idea that these embarrassing displays help with self-regulation. Just how this occurs is unclear. It may be that secondary emotions work through facial or postural cues to trigger a physiological shift away from an intense emotion. Or it’s possible that when people feel intense positive emotions, they express negativity to give important events the appropriate gravitas.

What is an appropriate mechanism to stop nervous laughter if caused by ptsd and if a person has always been shy? How should family, friends and significant others respond if it makes them uncomfortable when one has nervous laughter?

We are talking about evolution of the species here. A baby laughs to be more adorable when they are under threat.

Only my opinion but watching many parents undertaking many quite idiotic actions that physically and psychologically cause this automatic response for their own entertainment.

Laughter – and being “cute” might just prevent them from being hurt or eaten.
( we are talking evolution)

I think it’s a reaction to a fright !

But it is still cute.

i was raised in the south with a belt instead of a discussion. My Dad also “raised” my mom. I was 4th daughter and have felt nervous all my life. my mom was given diet pills by her doc because she was upset about being pregnant and gaining more weight… wonder now if my dad made her feel fat? i remember sometimes laughing so hard with the family that i couldn’t quit laughing. Daddy told me i was hysterical and he would slap me across the face and i can still remember the feeling of shock and confusion. But it certainly stopped my laughter. how do i know if i’m mentally ill or a product of abuse? My mom never bonded with me and i was raised by my dad.. my sisters rejected me along with my mom…they still don’t like my honesty, they call me a blabbermouth, and remind me of what a brat i was when we were young. i didn’t even begin to tell you about my granddad and i have no idea why he singled me out… i was so lost and confused as a child? when i was 40, i divorced, bought a house, a car, started dance lessons and therapy. my life began at 40. my therapist helped me to see that my parents screwed up the first 20, i screwed up the second 20 and what did i plan to do with the next 20? That made me sit up.. i’m 70 now. i’ve just finished raising the most beautiful grandchild you have ever seen…. or maybe she raised me… she’s 18 now. And she loves me as much as i love her… we take care of each other and up lift each other… my parents had no idea how to do that… they were young when WWI changed the world… and they served and never said a word about it in WWII… they raised us the same way their parents raised them.. I’m so thankful for them… if i had been a privilaged (can’t spell?) white girl i might not even be alive much less alive in the light …. sometimes good turns into bad and vice versa.. i’m old and i tell you this… Teach your kids how to make it in this world. Love them with all your heart. Do the best that you can…And know when it’s all said and done..How they turn out is whether or not they agree with you.