News > We're Only Human > Into The Hole: Terror And Survival

I know an artist who has a special interest in holes. He laboriously sculpts geometric holes in the earth, and then recreates them elsewhere. I recently saw, in a Chicago gallery, a hole he had sculpted in California, surrounded by outsize photographs of other similar holes. The overall effect was seductive and mysterious.

Not everyone finds holes seductive and mysterious. Indeed, some people find holes—and images of holes—deeply upsetting, even terrifying. These people suffer from a common but little known phobia known as trypophobia. Phobias are by definition irrational and excessive, and indeed trypophobia sufferers recognize that their fear is unreasonable. Even so, this disorder can be debilitating, as numerous testimonials on Internet support groups show. Sufferers report crushing anxiety, trembling and nausea when confronted with seemingly innocuous images of empty spaces.

As with most irrational fears, the origins of trypophobia are unknown. Indeed, the disorder has rarely been described in the clinical literature, according to two psychological scientists at the University of Essex, UK, who dissect it in an article to appear in the journal Psychological Science. Geoff Cole and Arnold Wilkins were intrigued by anecdotal reports that certain geometrical works of art make people very uncomfortable, even causing migraines in some, and they decide to explore this phenomenon. They knew of some existing work, using spectral analysis, which showed that the discomfiting patterns differ fundamentally from patterns in nature. That is, the natural world has a characteristic visual property that’s lacking in these upsetting patterns.

Reports of this visual anomaly led them to trypophobia, where they found another intriguing clue to follow: Trypophobia is different than many phobias in being completely visual. That is, people who are phobic about cats or clowns are uncomfortable in the presence of cats or clowns, even if they are out of sight. Trypophobia, by contrast, is only triggered by seeing holes, or images of holes. 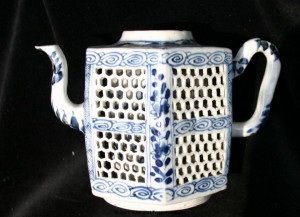 Cole and Wilkins decided to pursue these leads. They wanted to use the same spectral analysis technique to study images that provoke terror in some people, to see if they have this unusual visual feature. So they analyzed a range of images known to trigger a phobic response. They found these images—and made a random selection—at a trypophobia website (www.trypophobia.com). It should be noted that many of the images on this website depict patterns of skin lesions, and they can be quite grotesque. But many others—the more puzzling ones—show normal everyday patterns of holes—like those in a latticework pie crust or ceramics or wood, even in the material of a woman’s purse. Cole and Wilkins compared the visual aspects of these images to control images, which they found simply by Googling “images of holes.” They wanted to see if spectral analysis revealed a difference in the fundamental visual properties of these two groups of images.

And it did, clearly. The arrays of holes that trigger phobic reactions—and only these holes—lacked the characteristic visual properties of natural images. They were “unnatural” at a basic visual level.

But why did this make them terrifying? Here the scientists stumbled by chance on another clue. They learned of a case study of a person who was phobic about not only holes, but certain animals as well. What’s more, the animals that triggered this phobic reaction were all highly poisonous. Following this lead, Cole and Wilkins sought out images of the world’s most poisonous animals—the Blue Ringed Octopus, the Box Jellyfish, the Death Stalker Scorpion, the Puffer Fish, and other equally scary creatures. They located ten images of the ten most poisonous animals and performed the same spectral analysis on these images. 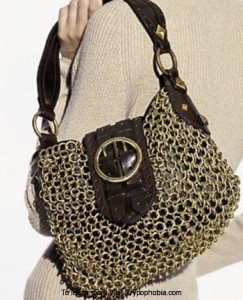 The results were unambiguous. These animals’ basic visual properties matched the distinctive properties of the terrifying holes. There is apparently a spectral pattern that characterizes both holes and dangerous animals, yet is processed outside of conscious awareness.  The scientists did a small follow-up analysis of snake and spider images only—since fear of snakes and spiders, even harmless ones, is one of the most common phobias worldwide. They found that even harmless snakes and spiders shared the visual properties of highly dangerous animals. In other words, any image that we might see, if it coincidentally possesses this fundamental visual features of a threatening animal, could trigger aversion—even a meaningless cluster of holes.

The scientists believe that this aversion—at least a mild form of it—had survival value early in human history. Humans have been selected, according to Darwinian principles, for their keen ability to detect poisonous organisms, rapidly and unconsciously, and this innate predisposition stays with us today. In that sense, we are all endowed with some sensitivity to certain images of holes, and trypophobia is just an exaggeration of this normal survival skill.

News > We're Only Human > Into The Hole: Terror And Survival

I emailed Dr. Wilkins last September 17th and asked if he knows of any EEG studies done on a trypophobia patient.
He did not know of any. I arranged for my patient to have an EEG and showed her several photos that caused a phobic reaction . There were no EEG changes although ahe experienced panic.

I LOVE how you put the typical triggering images all around your article where people who might be experiencing the very disorder your writing about will be forced to look at them while trying to read about their condition online. Just BRILLIANT.

I still don’t feel that aversion to a certain type of organic clusters of holes or wasp or bees nest is a phobia,people don’t fear it,they are grossed out severly and digusted by the images,everyone I showed the images to said yuck! im grossed out now bylooking at it ,now im itching like crazy,it’s a gross out not a phobia.you’re overloading your brain with images that it cannot process ,it can’t acess all those holes at once,nor all the gross images,so now all of the images are trapped in your brain to try and figure out,now you got problems.please do not keep trying to force your brain to process something it cant.

Wow I just discovered this phobia has a name and it actually affects other people… I thought I was just weird. No one understood me when I said I hated skin conditions and bee hives and hexagons.. I wonder why scientists are just now discovering that this is becoming a widespread phobia.

I think have the opposite of trypophobia…I am fascinated by trypophobic-triggering images. Mind you, it may be just a morbid fascination developed as a reactionary response to trypophobic tendencies, but every now and then I google “typophobia” just to look at collections of holes and try to suss out what makes them so mesmerizing.

I have the same exact thing, and I guess there are a lot of us who have “trypophiloa”