Following another person’s gaze can reveal a wealth of information critical to social interactions and also to safety. Gaze following typically emerges in infancy, and new research looking at preterm infants suggests that it’s visual experience, not maturational age, that underlies this critical ability. 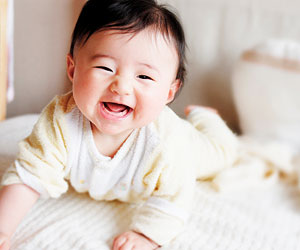 “To the best of our knowledge, this is the first study showing that some aspects of the early development of social cognition is influenced by experience, even when the human brain is highly immature,” says psychological scientist Marcela Peña of Pontificia Universidad Católica de Chile, lead researcher on the study. “Our results are important for modeling early cognitive development.”

To disentangle the roles played by neural maturation and environmental exposure in relation to gaze following, Peña and colleagues decided to compare the gaze following abilities of preterm and full-term infants.

“Because preterm infants are exposed to face-to-face interactions earlier (in terms of postmenstrual age) than infants who are born at term, they may become sensitive to gaze direction sooner as well,” the researchers explain.

While sitting in his or her mother’s lap, the infants were presented with a sound and visual cue to grab their attention. As soon as they were looking at the screen, a video of a woman appeared and the woman made peek-a-boo like gestures. The woman then turned her head and directed her gaze toward one side of the screen; subsequently, a moving toy appeared on each side of the screen. Using an eyetracking system adapted for infants, the researchers were able to monitor which side of the screen infants looked to first. The researchers repeated this procedure with each infant 20 times.

This pattern of results held even when the woman indicated direction with only her eyes, while her head continued to face forward.

Together, these findings suggest that exposure to visual experience outside the womb may matter most for early gaze following.

“Combined with previous results on vision and language cognition, our results support the idea that the early steps of human cognition develops in an asynchronous way,” says Peña. “Some systems are more or less sensitive to external stimulation, but others can be more influenced by biological maturation.”