Talking on a cell phone is a known driving distraction, but new research suggests that talking to someone who can see what you see may actually contribute to driving safety.  Results from a driving simulator study showed that conversation partners who could see the driver’s view via videophone were able to modulate their conversation according to what was happening on the road. 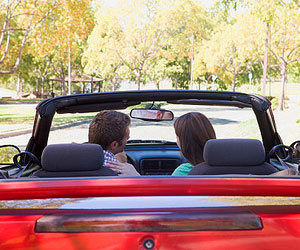 “We’ve done years of study on driver distraction, and previous studies suggest that passengers often aren’t distracting. In fact, passengers can be helpful, especially if they’re adults who have had experience and also are active drivers themselves,” said University of Illinois psychology professor and Beckman Institute director Arthur Kramer. Kramer led the research with postdoctoral fellow Kyle Mathewson, now a professor of psychology at the University of Alberta, and graduate student John Gaspar.

The drivers, all college-age participants, encountered various driving challenges that included merging and navigating around unpredictable drivers in other cars. The researchers kept track of the drivers’ lateral moves, distance from other cars, speed, collisions, and ability to find and take a designated exit. They also recorded speech and tracked the driver’s eye movements.

Driving alone was the safest option, the researchers found, in line with previous research. There were significantly fewer collisions when drivers were alone in the simulated car than when they were speaking to a passenger in the car. Passengers helped drivers find their exits and improved their memory of road signs, but they detracted from overall safety (avoidance of collisions), Kramer said.

Speaking to someone on a cell phone who had no awareness of what was going on inside or outside the car was the most dangerous of the conditions — it more than tripled the likelihood of a collision, the researchers found.

The most interesting results, however, occurred when a driver spoke to someone who wasn’t in the car but who could see what was happening via videophone.

“Drivers were less likely to be involved in a collision when their remote partner could see what they were seeing,” Gaspar said. “And this benefit seems to be driven by changes in the way partners talked to the driver.”

Seeing the driver and watching what was going on in traffic during the conversation allowed the non-driving partner to stop speaking, for example, when something unexpected occurred on the road, or to point out a situation that might be dangerous, Gaspar said.

The findings demonstrate that a passenger or conversation partner can contribute significantly to the safety of the driving experience, Kramer said. If that person knows what’s going on in the car, he or she can stop talking or draw the driver’s attention to specific road conditions. While it isn’t safer for the driver than driving alone or in silence, it is safer than speaking on a cell phone to someone who doesn’t know what’s going on in and around the car, he said.

“There is no condition in which having the videophone information is worse than speaking on a cell phone; the collisions are reduced 40 or 50 percent — that’s pretty big,” Kramer said. “I’m not suggesting people speak on cell phones while driving, but if the driver is speaking to someone who is not in the car, it would be helpful for the conversation partner to have information about what the driver is seeing and doing.”

This research was supported by a grant from the Office of Naval Research to A. F. Kramer and by a Beckman Institute fellowship to K. E. Mathewson.